Halliday and Jones join Curtain and Olson in FX categories for 2012. 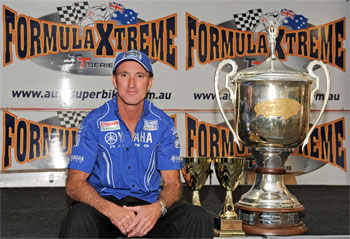 Yamaha’s presence in Australian road racing has expanded for 2012 with the contracting of four factory supported riders under the YRT (Yamaha Racing Team) banner.

Team Director, John Redding, is proud to announce the Yamaha Racing Team consisting of 2011 riders Kevin Curtain and Rick Olson are to be joined by young guns Mike Jones and Cru Halliday.

All riders will compete in the Australian FX Superbike Championship as well as the FX Nationals throughout the course of 2012.

“We have had a tremendous amount of support from our sponsors, so much so, that we were able to run our second semi and get more riders on the track in 2012,” John Redding said.

“As a company, Yamaha prides itself in racing and the company thrives on its success. All of a biggest selling models – road and off road- are competition based bikes and have won events and championships all over the world.

“Having four top line factory supported riders in Australia shows the commitment Yamaha and our team sponsors have to racing in this country and we look forward to a successful year showcasing our team, bikes and riders,” Redding finishes.

Kevin Curtain
The man returns. After a dominant year in 2011 where he claimed the Australasian FX Superbike Championship, the 600cc Supersport, dual FX National crowns as well as the 600cc ASBK championship win, Kevin Curtain is back and looking forward to another challenging and exciting year in 2012.

Again racing both categories; the 1000cc and 600cc on board the legendary Yamaha R1 and R6, Curtain is a rider who pushes himself to the limit to achieve his success. His partnership with Yamaha as been long and successful and he hopes 2012 continues in the same vein and he is confident that he and the team can again deliver the goods this year.

“Results are a reflection not only the work I put in as a rider but also what the team does behind the scenes. The YRT crew is the best in the business and they do a great job of providing us with the best bikes on the track and the best infrastructure in the paddock.”

“I look forward to this season and hope I can pull off the same results as 2011,” Curtain offers.

Rick Olson
Rick Olson continues to be the perfect understudy to learn from Curtain. Blessed with speed to burn and the enthusiasm of youth, Olson continues to grow as a rider with each and every year and now is knocking on the door of major championship success.

Olson will compete in the FX Australian Superbike Championship on the factory Yamaha R1.

“Last year wasn’t the greatest for me as a racer, but I felt I learnt a lot. My aim for 2012 is to take what I have learnt in the past and put it into action and have my best season yet. I feel confident in my preparations and the team as worked hard throughout the off season to improve the bike so I’m ready to go and can’t wait for the season to begin.”

Introducing
Cru Halliday and Mike Jones are new team members for 2012 as they embark on their careers as factory riders. Both riders have been rewarded for the success and loyalty to Yamaha as both have been groomed via the YRD program Yamaha offers to up and coming riders.

Halliday comes to the factory Yamaha squad after two extremely successful seasons winning championships as a support rider for Yamaha. Having paid his dues, Halliday steps up to the factory program and will compete on the Yamaha R1 in the Formula Oz Class of the FX Australian Superbike Championships.

“As a racer, your goal is always to win and race for a factory supported team. To become a member of YRT is awesome but I also realize the real work has only just begun. On a team like this, there are no excuses, as we have the best bikes, the best resources and the best staff, so it is my job to ensure we get the results on the track.”

“I am excited about this deal and know it’s the start of a huge year for me and this new team,” Halliday said.

Mike Jones has made a name for himself as a young tear-away racer who isn’t afraid to mix it up with the established riders in the 600cc class. He achieved some great results in 2011, winning plenty of races and trading paint with the big names in Australian road racing. That kind of racing doesn’t go unnoticed and when John Redding went looking for a 600cc recruit for the Yamaha Race Team, Jones was the first man to get the call up.

“My last couple of years has been pretty good and the fact that both Cru and I were both Yamaha supported riders before this team means our loyalty as well as our results was rewarded. It’s pretty exciting to be a part of something like this and I look forward to working closely with John and the entire team for 2012,” Jones states.

The running of four riders and two factory race team trucks is a huge task and one that Ray Howard, head of Yamaha Motorsports, hopes will reinvigorate racing in Australia.

“Yamaha and YRT have put a huge amount of work into our road racing program and continue to look for ways to expand and grow the sport. John’s passion alone is enough to make things happen.”

“2011 was an amazing year for YRT and with the new riders coming onboard, I feel we have the perfect blend of youth and experience that can match the heights of our 2011 season.”

YRT and YRD support teams will meet in late February for a two day test session and shake down of the 2012 race bikes. The first official race is in March and then its full steam ahead as the two blue trucks work their way up and down the eastern seaboard in search of championship success.