Team Suzuki's Josh Waters has claimed victory in the first ASBK round of 2012. 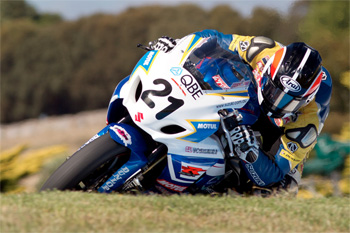 Team Suzuki’s Josh Waters has claimed victory in the first QBE Australian Superbike Championship round of the season at Phillip Island in Victoria.

Waters dominated the opening race of the season on Sunday morning to win by over seven seconds, with a second place finish in race two sealing the overall.

Team Honda Racing’s Wayne Maxwell won the second race of the weekend following an entertaining battle with Waters, however a hole in the radiator during race one dashed his hopes of the overall.

Completing the top five were two more Suzuki contenders in Robbie Bugden (Team Volvo Group Suzuki) and Ben Attard (Team Suzuki), who was a solid third in race one.

Meanwhile, Maxwell was eighth overall despite his DNF in the first race of the season, bouncing back to salvage 25 points with the race two win.