Team Suzuki's Wayne Maxwell is happy with the direction his 2013 campaign is heading as he prepares for the first Australian Superbike Championship pointscoring round in Tasmania this week. 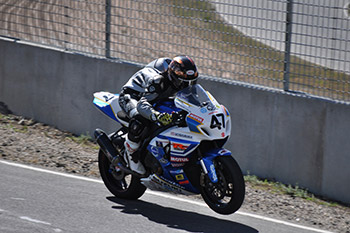 Team Suzuki’s Wayne Maxwell is happy with the direction his 2013 campaign is heading as he prepares for the first Australian Superbike Championship pointscoring round in Tasmania this week.

Maxwell dominated the Phillip Island Superbike Challenge in February as a number of his title rivals tried their hand as World Superbike wildcards.

He said the event afforded him a valuable opportunity to test, change and race his Suzuki without the pressure of scoring points.

“Changing teams after five years is a big challenge so it was great to be able to race at the recent WSBK round,” said Maxwell.

“It gave me a chance to learn the characteristics of the bike before this weekend’s first point scoring event.”

Maxwell and a host of other riders took advantage of a test session at the tight and challenging Symmons Plains track a fortnight ago.

The dramatic contrast in track characteristics meant it was important to establish a base setup to work on ahead of the practice and qualifying sessions.

“We learnt a lot at Phillip Island and followed it up with a good test at Symmons Plains two weeks ago. We are still changing the bike quite a lot and I am still trying to find my feet but we are certainly heading in the right direction.

“Symmons Plains has been good to me over the years, the last time we raced there was in 2011 and I had two pole positions and a couple of podium finishes but I have never had a clean sweep.”

The ASBK field will open on-track proceedings on Friday morning for an 8.20am practice session before returning at 4.00pm for qualifying.

An early Superpole session on Saturday will set the grid for the opening race just after midday, with the second and final race to follow on Sunday.