Team InsureMyRide Racing's Glenn Scott is undergoing final preparations for this week's first point-scoring round of the Australian Superbike Championship at Tasmania's Symmons Plains Raceway alongside the V8 Supercars. 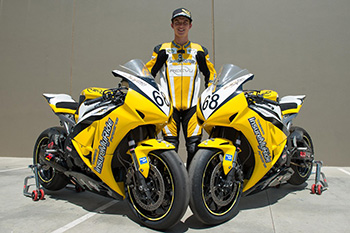 Glenn Scott with the Team InsureMyRide Racing Hondas he will campaign in 2013 Image: Steve Thibou/Motopix

Team InsureMyRide Racing’s Glenn Scott is undergoing final preparations for this week’s first point-scoring round of the Australian Superbike Championship at Tasmania’s Symmons Plains Raceway alongside the V8 Supercars.

Scott’s participation in the opening round of the World Superbike Championship at Phillip Island saw him gain a mountain of experience which he feels will put him in good stead going into the weekend’s races.

“The season kicked off really well where we finished a solid fourth position, it was a huge eye opener as to how much there was to learn about the 1000cc and how incredibly fast the bike was,” said Scott.

“Team InsureMyRide Racing have been working hard to set ourselves up for the first points round of the season, I am extremely excited to be in the Superbike class this year and for the first round to be with the V8 Supercars.”

The team took advantage of a test opportunity at Symmons Plains Raceway recently, and for Glenn, it was vital preparation ahead of the first round, crucial for getting points on the board at the start of the season.

“Our test at Symmons Plains went well, I got comfortable on the bike and started to gain confidence to push the Team InsureMyRide Racing bike alot harder,” continued Scott.

“We also found direction not only in set up but through the electronics as well, the whole team are continually learning and it is a positive for us to improve everytime we step on the bike.”

The young racer has set himself a number of goals for the year and knows the competition will be strong.

“The Superbike class is no easy task, the whole category is fast and it’s important for Team InsureMyRide Racing to take small steps,” he said.

“Our goals are to finish far up the field as possible every race, have fun, keep learning and enjoy that 200hp because it’s not every day you get to hang off the side of a Superbike doing 300km/h.”

After a brief hiatus in 2012, the ASBK returns to the challenging Tasmanian layout in 2013, again alongside the V8 Supercars event.

“I’ve been told the atmosphere is electric, it will be amazing to be there especially to have the chance to race at a V8 Supercar round, it will be an excellent chance for my sponsors to get a lot of exposure in front of such a big crowd,” Scott concluded.