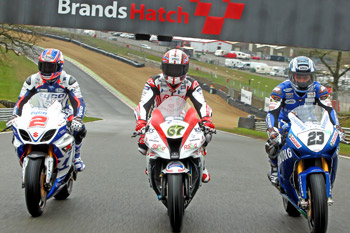 Brookes, Byrne and Kiyonari are set for the Brands Hatch opener

The 2013 MCE Insurance British Superbike Championship kicks off at Brands Hatch on April 5-7 and the anticipation is already building as the two most successful riders in the series’ history, Kent’s Shane ‘Shakey’ Byrne and Japan’s Ryuichi Kiyonari, prepare to commence battle in the ‘War for Four’ title victories.

Byrne returns to his home circuit to begin his title defence for the Rapid Solicitors Kawasaki team and is just two race wins short of Kiyonari’s record race-winning tally of 43.

The pair have shown a similar pace in pre-season testing and both riders are fully focused on becoming the undisputed king of BSB at the end of this year’s 26-race championship campaign.

“Brands Hatch is my home circuit and we want to get the season off to the best possible start,” said Byrne.

“My team have been working hard all winter to give me the best possible package and I am prepared to push it as far as it takes to win a fourth title.

“We would have liked to have done more laps in testing, but everyone is in the same boat so it should make it interesting!

“Pre-season everyone is talking about me and Kiyo but I think there is going to be a great deal more to come from the other riders too.”

With testing out of the way, Kiyonari is now focused on delivering race results.

“I am looking forward to the first races of the season but I am also a bit nervous; I always get nervous before the start of a season!” said Kiyonari.

“It is exciting for me to be back in the championship with Samsung Honda – testing has been good, but now all I want to do is race.

“I have come back to get good results again for myself, the team and the British fans.

“I want to show that I am not finished, that I can be faster and can win again.”

Australia will field two of its former national Superbike champions on the premier class grid.

Tyco Suzuki’s Josh Brookes will again enter the season as a title favourite, and will be joined by series debutant Josh Waters who is set to make a big impression with Milwaukee Yamaha in his first full international season.