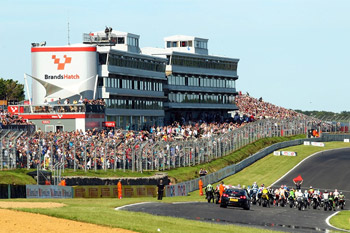 The iconic Brands Hatch circuit will open proceedings for the 2013 BSB Supersport battle.

Richards sealed the 2012 title at the Kent circuit at the final round and returns ready to take on his new challengers, including 2002 champion Stuart Easton (Mar-Train Yamaha) and 2011 title-winner Alastair Seeley (Gearlink Kawasaki) as the pair return to the Supersport grid from the BSB ranks.

Richards knows he has a considerable task on his hands if he is to defend the number one plate.

“There have been a couple of fast guys move out of the championship but you just have to look at who has come in and it will be no easier this year,” explained Richards.

“We have been testing on the new bike and although it’s been hard work to get where we want to be, it’s all coming together and I know the brand new Triumph Daytona 675R will be good.

“My main priority is to win the title again this year and I’m focusing hard on that.”

The three title-winning riders have strong team-mates pushing them for podium finishes this season; Richards again lines up alongside fellow countryman Billy McConnell who has come close to the title in previous seasons.

In the Mar-Train Yamaha garage Easton is joined by Supersport Cup champion Glen Irwin whilst Seeley teams up with his former rival and sparring partner Ben Wilson.