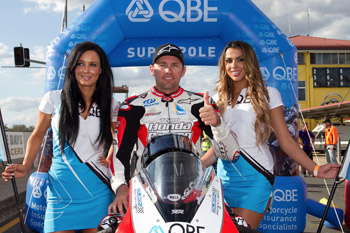 Jamie Stauffer celebrates Superpole victory at the final round of the 2012 season.

The Superpole format to decide Australian Superbike grid positions has undergone a major overhaul ahead of the Symmons Plains event this weekend.

Formerly the top qualifiers would have the track to themselves to put together a single flying lap in a bid for pole.

The format revision will turn up the pressure early, with clear track paramount and little opportunity for error.

The new Superpole session will start with the top 13 riders from qualifying in a 10-minute battle for a top time.

The same format will be adopted for the Supersport class from round three onwards.

With 18 riders entered in Tasmania, just five will be absent from the 40-minute Superpole which will be run from 7.50am local tomorrow morning.

Superbike qualifying, a 20-minute session, will be run from 4.00pm this afternoon.