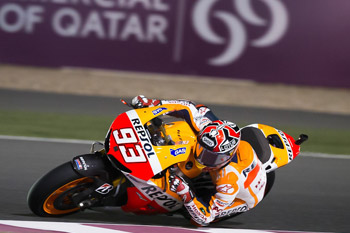 Marquez lights up Losail with the fastest time after FP3.

MotoGP rookie Marc Márquez has edged out defending Champion Jorge Lorenzo by one thousandth of a second at the end of Free Practice 3 in Qatar.

Márquez’ lit up the time sheets with a 1m56.084 lap on his second-last attempt; Lorenzo’s best effort came mid-session as both riders completed 17 laps.

It highlights an incredible debut for the reigning Moto2 World Champion who has shown he is not intimidated by the star-studded MotoGP field.

“Practice today went pretty well – better than expected,” said Márquez. “I was very comfortable on the bike and this is the important thing.

“Our foundation isn’t bad at all – we are improving in every session and working with Sunday’s race in mind.

“What we are missing is a bit of pace and consistency. We will have to make the most of the 30 minutes that we have before qualifying tomorrow to improve those points.”

Lorenzo was a close second to his countryman in both FP2 and FP3, with teammate Valentino Rossi and Monster Tech 3 Yamaha pilot Cal Crutchlow claiming third fastest across the respective sessions.

Andrea Dovizioso rounded out the top five in an encouraging showing for the Ducati team, while Dani Pedrosa continued to hunt for front end grip and settled for sixth-fastest.

Alvaro Bautista, Nicky Hayden, Bradley Smith and Stefan Bradl all advance to the new Q2 session while the remaining riders will battle it out in this evening’s Q1.

The fastest two riders from Q1 will advance to Q2 to set up a 12-rider battle for pole position as part of the refreshed qualifying format.

From practice pace the fight for the transfer positions will be on between Pramac Ducati teammates Andrea Iannone and Ben Spies, along with the surprising CRT machine of Aleix Espargaró.

After Thursday’s running, Australian Bryan Staring had improved a place on his GO&FUN Gresini CRT machine to finish FP3 in 21st position, 3.674s off the lead pace.

Scott Redding took P4 while Julian Simon made it three Spanish riders in the top five.

Australia’s Anthony West was one of only six riders in the field to set his fastest Free Practice lap in the third session. West was 23rd in a field of 32 Moto2 machines.

Australia’s Jack Miller was 15th fastest, and one of only two riders to set their fastest lap in the final session. Countryman Arthur Sissis was 22nd, 2.772s off of teammate Salom’s pace.