Lorenzo and Rossi elated with Yamaha’s standout showing in Qatar 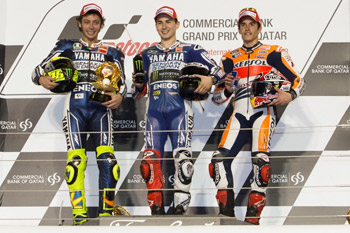 Jorge Lorenzo’s pre-race nerves soon gave way to a sense of duty as he dispatched 22 near-perfect laps on the way to a clear victory in the opening Grand Prix of the 2013 season.

Lorenzo’s dominance is certain to dishearten his rivals who weren’t able to trouble to Spaniard as the race got underway.

His goal was to build a gap, and he was assisted as Dani Pedrosa, Cal Crutchlow and Marc Marquez fought amongst themselves for track position.

“Half an hour before the race I felt a little bit nervous so I had to really concentrate and relax on the grid,” said Lorenzo. “I knew it was going to be difficult to open a gap but I had to try, I made a good start and pushed more than 100%.

“In the beginning it was hard to open the gap as Pedrosa didn’t want to let me get away, he tried to stay with me but after six or seven laps I opened the gap which made me more confident to keep my pace.”

Lorenzo expressed his delight for the Yamaha Factory Racing team and the result of his returned teammate.

“I’m very happy for Yamaha and happy for Valentino as he has now passed two difficult years,” the Mallorcan added.

Rossi was elated with the result after two years of sub-par performances with factory Ducati.

“I’m more than happy, very happy indeed because it was my dream to come back with Yamaha,” said Rossi. “To arrive on the podium at the first race was my target from November and I put all my effort to arrive at the maximum here.

“It was a difficult weekend, especially yesterday in qualifying, but I know I had great pace so I tried to recover in the beginning but I made a mistake and I lost time.

“I had to do a great second part of the race and step by step I came close to my podium. In the end there was a great battle, especially with Marc for the second place.

“I’m so happy for me, for my team, for my friends and all my fans who stay with me through two difficult years and also for Yamaha, to start the season with first and second place is not so bad!”

In addition to the rider standings, the Yamaha Factory Racing team took maximum points in the battle for team supremacy, already 16 points clear of Repsol Honda.