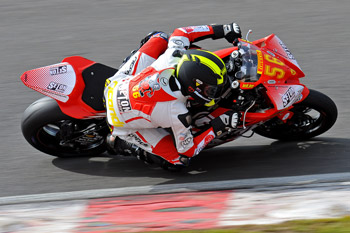 Returning to the site of his BSB series debut in 2012, the 23-year-old Australian is scaling the steep learning curve and comes into the 2013 championship full of confidence following a strong testing program.

Wilkinson qualified 18th for the 22-lap race and made a blistering start – by lap two he was up to 12th place and pressuring the top 10 battle pack.

As the race settled into its natural rhythm, he found himself pushed back and forth between positions 11 and 14, before eventually plotting his charge through the pack to as high as sixth.

Wilkinson dropped back two positions before the run to the chequered flag, finishing a commendable eighth.

“I struggled a little early in the weekend getting back into UK mode with the crazy weather but come race day the Seton Tuning Crew were able to get me more and more confident on the bike,” explained Wilkinson.

“We learnt a lot from this weekend that we will continue to move forward with. The race was really good for me. I was more confident pushing the bike and getting more out of it consistently throughout the race.

“To come away with eight points is a good start to our championship campaign and I’m really looking forward to Thruxton next weekend for round two of the championship!”

Team principal Phil Seton praised the efforts of Wilkinson after a strong start to the season.

“For Mark, that was not only his best finishing position but also his highest qualifying, so his weekend is full of positives,” said Seton. “Mark put in a great ride in the race and it was very exciting for us to watch, just a shame he missed out on sixth.”

The next round of the Pirelli National Superstock 600 Championship, a support class to the British Superbikes, will be held at Thruxton this weekend.