Beaton describes “scariest ever moment on a motorcycle”

Oil coats visor with next to no visibility during opening Tasmanian ASBK race. 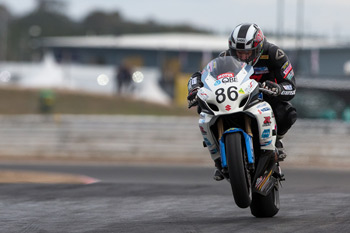 Racers Edge Performance rider Beau Beaton is still thanking his lucky stars after a mechanical failure ahead of him saw his visor coated in oil in the opening Australian Superbike Championship (ASBK) race in Tasmania.

From ninth place on the grid, Beaton began a forwards march on his Suzuki GSX-R1000 and soon locked onto the tail of Next Gen Motorsports’ BMW rider Linden Magee.

The pair battled for the next nine laps before a rare failure on the BMW saw a cloud of oil cover Beaton, reducing visibility to almost nil.

“Scariest moment I’ve ever had on a motorcycle I don’t mind telling you” said Beaton. “I was right behind Linden when it went bang and I got covered in oil and there was smoke everywhere.

“I didn’t know if I was still on the track, if there was a fence or a ditch coming up or what. I just wiped the visor as soon as I could and just got my head down and back into the race.”

Beaton recovered for ninth place in race one and resumed the battle with Magee in race two, finishing seventh.

“I was feeling really comfortable and the bike was really good on the brakes into the hairpin,” said Beaton of Sunday’s final race. “I was a little slower coming onto the straight but that really our only weakness.”

“We had a small issue that just slowed us a fraction over the last two laps, I was really keen for a good fight over the last few laps and I think it would have been a three way dive into the last corner. Still, that’s racing and we’re happy to come away with good points for the weekend.”

Beaton will head to round two of the ASBK in Queensland placed eighth in points.

The Racers Edge Performance outfit was one of a number of teams within the paddock that banded together to help fellow privateer Chas Hern back onto the track after his race one crash.