FIXI Crescent Suzuki rider confined to a splint after surgery for flesh wound. 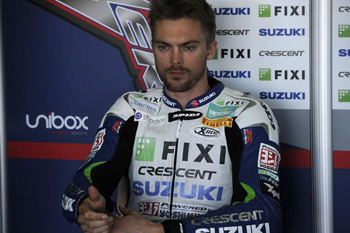 Leon Camier was sidelined in Spain after a high-side crash resulted in a serious flesh wound to his knee. Image: Suzuki-Racing.com.

FIXI Crescent Suzuki’s Leon Camier faces a race to be fit for the next round of the World Superbike Championship after a late withdrawal from the Aragon race for a flesh wound sustained to his knee.

A high-side crash in qualifying saw Camier immediately transferred to a local Spanish hospital where an assessment and surgical procedure was carried out.

Camier will be confined to a splint until at least the weekend and expressed frustration at his bad run of luck.

“To be in the hospital and kept away from the race due to a flesh wound is boring and extremely frustrating to say the least,” said Camier. “Having said that, I guess I should be thankful that nothing is broken as it was a pretty big impact.

“My frustration is made so much worse because the bike was feeling good, the lap-time was coming easily and I know we could have had a good fight.

“I need to make sure the chance of infection doesn’t happen and if the skin heals and swelling goes down I will have a chance of being at the race. Where the bone has tried to push through the skin is the problem, because that could get infected.

“There is also a little part near a ligament that’s damaged, so I’ve got a lot of internal stitching to repair everything. I’ll take things as they come and hopefully everything will be ok.

“I just hope our luck changes and that we can get back out there to give the team a result.”

A non-starter at Aragon, Camier slipped to 14th place on the standings, a result made even more frustrating with the fact that his pace was good for an unofficial second place at the team’s earlier three-day test in Spain.