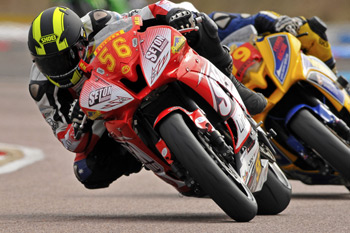 A clutch cable failure proved costly as Seton Tuning Yamaha’s Mark Wilkinson faded from the lead pack in the Superstock 600 race at Thruxton on the weekend.

The Australian endured a tough weekend as changing conditions, including heavy rain and blustery winds, created setup headaches across the board.

Wilkinson finished 17th fastest in a dry opening qualifying session and was seventh in the wet, though the lack of pace in the second session meant he would start from row five.

“We came out in practice and had our wet setup pretty much sorted, but in the dry for qualifying one we were just a little off the pace,” explained Wilkinson. “The boys did a great job sorting a dry setup for me but unfortunately qualification two was wet and I was unable to improve my position on the grid.”

Race day was dry but windy, and after the race resumed following a brief opening-lap safety car period, Wilkinson had already made his way to 11th on a better-suited setup.

“I moved through the pack and began to close on the lead group of riders but with three laps remaining I had a mechanical problem with the clutch, which bumped me back through the pack,” he continued.

“It’s a gutting end to a tough weekend but we still scored points and take a lot of positives out of this weekend and move on to Oulton Park with a confident and positive mindset.”

Wilkinson salvaged some points from the weekend and holds down a top ten placing heading into round three.

The Seton Tuning Yamaha squad will test at Oulton Park tomorrow and are confident of rectifying the mechanical issue that hindered the Australian’s charge.