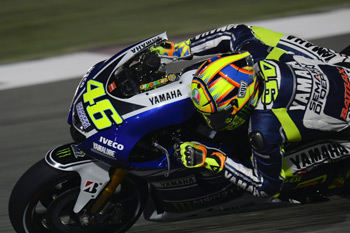 Valentino Rossi is one of just a few riders who have had the chance to ride at the COTA track.

Six-time MotoGP World Champion Valentino Rossi is motivated by the Yamaha Factory Racing’s strong start to the season and will go to this weekend’s Austin event with “more certainty” having already tested at the brand-new Texas circuit.

Upon return to the team, the 34-year-old rounded out its one-two Qatar finish led by Jorge Lorenzo and must now be considered a title threat after two years out of the running in his difficult spell at Ducati.

“Austin will not be an easy race but for sure the podium in Qatar is giving us extra motivation,” said Rossi. “We have done a great job there and we can go to Austin with some more certainty.

“Our competitors will be very strong but our goal will be to bring home points. I am confident, I really like the track and my first impression, when we tested there, was that the circuit is beautiful.

“The track lay-out is very special: there is some downhill and uphill and the first braking zone is very technical. For me turn two is the best though and after when you enter into the chicane.

“The straight is very long, which is good for overtaking. I really look forward to racing at COTA.”

If either Yamaha Factory Racing rider is to win at the Circuit of the Americas a milestone mark will be reached. Rossi is aiming for his 80th MotoGP win while Lorenzo can take his tally to 25 if he continues his devastating form from a fortnight ago.