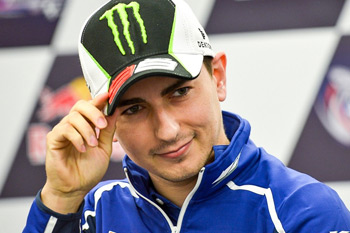 The paddock will be tipping their hat to Jorge Lorenzo if he can score his 100th grand prix podium in Austin. Image: MotoGP.com.

Reigning MotoGP World Champion Jorge Lorenzo is on the verge of his 100th career grand prix podium on the eve of the Austin event weekend.

The Spaniard, who has progressed through the 125cc and 250cc ranks – now Moto3 and Moto2 – entered the world championship in 2002 and scored his first podium placing, a win, at the Nelson Piquet circuit in Rio the following season.

Lorenzo took nine podiums on a 125cc machine, 29 on a 250cc and has scored the bulk of his podium finishes in the MotoGP ranks – 61.

Barring a crash or mechanical issues, it is hard to see the in-form Yamaha Factory Racing pilot missing out on his 100th podium finish at the inaugural Circuit of the Americas (COTA) event this weekend.

“In Qatar it was almost the perfect weekend, but the season is a long way yet,” said Lorenzo. “It is really important to start in a good way. To start with a crash or missing out on points is not good for your mentality.”

The points leader agreed that his team, along with factory Honda, did have an advantage over the other teams at COTA but said he still expected the weekend would be quite difficult.

“We were here one month ago and it was not easy for us. But it will be interesting to see how the track has changed in that time,” continued Lorenzo.

“I’m very excited to get out. It’s really difficult – one of the most difficult tracks in my career to understand. But we will have a big advantage over the teams that weren’t here to test.”

He led home stablemate Valentino Rossi in a one-two finish for factory Yamaha at Qatar, though it’s expected the Repsol Honda machines of Dani Pedrosa and Marc Marquez, the test pacesetters, will have the pace to push harder this weekend.