Aprilia's Sylvain Guintoli growing in confidence as he takes a 22-point lead to the Netherlands. 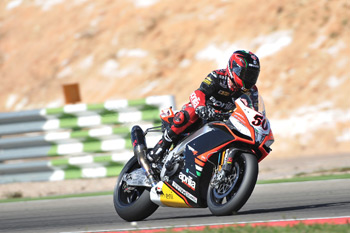 Aprilia’s Sylvain Guintoli has finished all four races of the 2013 World Superbike Championship within the top two and takes a commanding lead to Assen. Image: WorldSBK.com.

Aprilia’s Sylvain Guintoli leads the World Superbike Championship standings into the ‘cathedral’ of motorcycle racing, the Netherlands’ Assen TT circuit, for round three of competition this weekend.

Though all eyes were on the BMW of Chaz Davies who took both wins in Spain, Guintoli was the quiet achiever, taking two second place finishes at a track he admits to disliking.

Assen, on the other hand, is a track he loves, a fact that doesn’t bode well for the various title contenders who were struck with a bizarre run of attrition at Aragon.

Guintoli rides a 22-point lead to the 4.5 kilometre, 11-corner Dutch circuit, and is bristling with positivity.

“We come to Assen leading the championship and with growing confidence,” said Guintoli. “In Aragon, I had to face my demons. Together with my team, we worked hard and manage to get two great results.

“Assen is a place with many great memories. I had my first world stage podium in 250 back in 2003 and also my first World Superbike victory last year.

“I am excited to race again on this fantastic track and to enjoy once again the RSV4.”

Davies has produced top results at Assen in the past and is eager to ride the momentum of his double win at Aragon as he closes the gap to Guintoli.

“Obviously it is a confidence booster every time you win, but doing it twice really sets you up for the next races,” said Davies. “I am very comfortable now with the RR and how I am feeling on the bike.

“On top of that, Assen is a circuit I enjoy and one that has been good for me in the past. Back in 2011, I celebrated my first World Championship victory there by winning the Supersport race, last year it was the first time for me to go through to Superpole 3 and I had a pretty decent pace in the dry.”

Eugene Laverty, who sits third on the points ladder, is looking to make amends this weekend after plunging down the order with a disastrous showing in Aragon.

Laverty leads a tight battle pack of Italian riders in the top five, with Marco Melandri and Michel Fabrizio well placed to make up ground.

Team SBK Ducati Alstare are hopeful of moving forward after admitting their difficulties at both Phillip Island and Aragon.

Carlos Checa, who won here in 2011 and had a podium finish in 2012, is positive that the track will suit the characteristics of the 1199 Panigale as its development continues.

“I hope that the tests we carried out in Jerez after the race in Aragon bear fruit this weekend at Assen,” said Checa.

“Those two days were very important and in The Netherlands, on a track that is traditionally less problematic for the Ducati, maybe we’ll be able to make some good progress.”

For Australian hope Mark Aitchison, the event will mark a chance to move forward from two non-results in Spain as the Effenbert Liberty team continues its goal of moving forward.

The prospect of countryman Damian Cudlin joining him on the grid is looking less likely now, with Leon Camier passing a track fitness test after the injury sustained at Aragon looked possible to sideline him from the weekend.

Cudlin remains on standby for the team, however, and will make for than a more than suitable stand-in with a wealth of racing experience to his name.

In the World Supersport ranks, Fabien Foret takes a narrow lead into the event over Michael van der Mark, with Luca Scassa, Kenan Sofuoglu and Andrea Antonelli rounding out the top five.

As was typical of the top classes at round two, the Supersport field received a fair shake-up with mechanical issues and crashes claiming many a lead rider. Australians Matt Davies and Mitchell Carr are both back in action in the 600cc class this weekend.

Mitchell Pirotta is our sole Superstock 1000 representative, while Adrian Nestorovic and Mike Jones both scored points at the season opener a fortnight ago – all three are eager to build on their positions as the season continues.

Rounding out the Australian contingent is Zac Levy, who rode to a commendable sixth place finish in his first European Junior Cup race in Spain. Levy shone in the one-make class and is out to show he can be competitive again in Assen.