Kawasaki's Tom Sykes continues his good form in the Netherlands with a half-second Superpole victory over the resurgent Jonathan Rea. 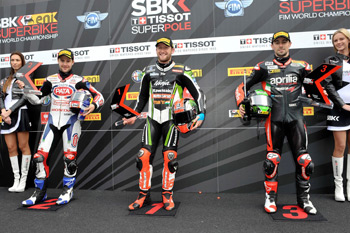 Tom Sykes topped his second Superpole session of the year, with Jonathan Rea and Eugene Laverty joining him on the podium. Image: WorldSBK.com.

Tom Sykes has secured his 13th career pole position with another dominant day on track at the third round of the World Superbike Championship at Assen.

The Kawasaki ZX-10R pilot’s 1m35.043 lap was good for the top grid spot, though he fell slightly short of his goal of beating the standing record of Jonathan Rea set in 2010.

“The ZX-10R is working well and I was quite happy with my race pace, so when we put the Pirelli qualifying tyre in it was even better,” said Sykes. “I am happy to be on the front row and even better to be in pole position.

“I just hope we can have some dry conditions tomorrow. Our decisions are pretty much made on what settings to run but we do have a little bit of discussion to have later, just to confirm things, but I think we know what to do.

“We put 22 laps on a tyre earlier and were very surprised and happy with the results, so when I am on clear track I can do what I want and I know what’s needed.”

Rea, who has won four of the past six races at Assen, was a solid second-fastest and is hopeful this can be the round he turns his season around.

“First of all, I’m just excited to be back in a front row press conference – the last time was the end of last season,” said Rea.

“I’m looking forward to the races, though; my guys have done some work and I’m feeling very, very comfortable on the bike but we’ve had minimal time so far to put distance on a race tyre.

“I think we have two options we can have a look at but a lot will depend on the temperature tomorrow. Superpole’s not really my thing, but I felt really confident at the start of Superpole 3 and went out first on a race tyre.”

The front row was rounded out by Eugene Laverty, the Aprilia Racing Team rider just edging out his stablemate Sylvain Guintoli, who was fourth, ahead of Loris Baz and Davide Giugliano.

Carlos Checa was eighth, ahead of Michel Fabrizio and Jules Cluzel. Notably absent from the top twelve placings is round two winner Chaz Davies, whose struggle on day one continued over the second day of track running.

Australia’s Mark Aitchison will start the World Superbike races from position 17 on his Effenbert Liberty Ducati.

Points leader Fabien Foret sealed the final front row spot despite a distinct lack of track running on the opening day, with the second row made up by Honda’s Jack Kenndy, MV Agusta’s Roberto Rolfo and Kawasaki’s Luca Scassa.

It was a difficult day for both Australian entries in the class, with Mitchell Carr 30th on the AARK Racing Triumph and Matt Davies 31st on the PTR Honda.

Superstock 1000 pole position was secured by Eddi La Marra on the Barni Racing Ducati who dislodged teammate Niccolo Canepa from the top spot by just 0.015 seconds on the final lap.

Reigning and defending champion Sylvain Barrier completes the front row for the race, and was the last rider in the class to set a time with the one-minute, 38-second bracket.

Leandro Mercado, Romain Lanusse and Ondrej Jezek round out the second row of the grid, with Australia’s hopes resting on the Team Goeleven Kawasaki of Mitchell Pirotta who will start from 25th on the grid.

Australia’s Adrian Nestorovic has been edged out of the win in a tooth and nail scrap on the final lap of the Superstock 600 race.

Gauthier Duwelz, Nestorovic’s teammate, pulled off a passing move in the closing corners to beat the Aussie to the line by a matter of metres – 0.182 seconds, to be exact.

The teammates fought for the race duration, reduced to 8 laps because of a red flag, and despite missing victory, Nestorovic makes good progress on the championship standings, moving to third.

The final spot on the podium was secured by Swiss rider Bastien Chesaux, with Australia’s Mike Jones finishing just outside the points in 18th place.

Pole in the European Junior cup field went to Frenchman Guillaume Raymond, with improved conditions closing the gap between the field after a difficult opening day.

Local rider, wildcard Bo Bendsneijder, used his experience at the Dutch circuit to take second on the grid, with Michael Canducci rounding out the front row.

Australian Zac Levy improved on his Friday performance to move to 22nd on the grid in the competitive one-make class.