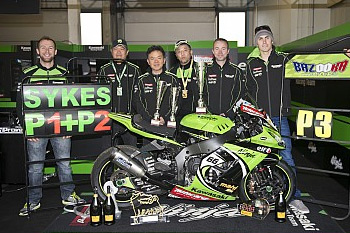 Tom Sykes’ Superpole win and one-two race finishes rounded out a good weekend for Kawasaki in the Netherlands.

A Superpole victory and a one-two finish in Sunday’s World Superbike (WSBK) races mark the best-ever event finish for Kawasaki’s Tom Sykes who was in devastating form at the Dutch round of the championship.

The Brit was a clear pacesetter in Superpole, though the major test would be his race pace, one he passed with flying colours.

He won the opening stoush by over eight seconds, marking Kawasaki’s first WSBK win at the Assen circuit since 2006.

Sykes led for 18 of the 22 laps in race two before being passed by Eugene Laverty in the final stages.

The “near perfect” result sees him spring back into contention on the WSBK standings, on a three-way tie for second place with Laverty and Chaz Davies.

“We have made progress after a slow start to the season so we will build more momentum now to move it all forward again,” said Sykes. “The bike was working well and was very consistent today.

“When Eugene came past me in race two I realised it was much easier to follow than to lead round here and it was just unfortunate that exiting the final chicane on the last lap I hit the kerb on the inside when I was trying to pass him, and I was out of the seat.

“It would have been great to win race two as well but I am happy with the day and we had and the great support at Assen from all the Kawasaki fans and some Tom Sykes fans.

“Race one was great for us and we did all we could. We have had a very strong winter test program, learned a lot and have a lot of information and data. Now we are finding where we need to be.”

It was a positive weekend all-round for the factory Kawasaki effort, with Loris Baz racing to his first podium finish of the season in the second race to go with a top five in race one.