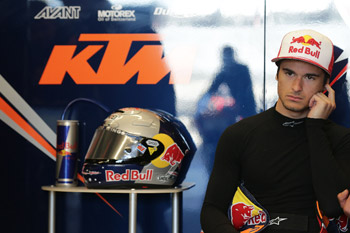 Arthur Sissis is focused on another top ten finish at the Jerez circuit this weekend. Image: Ajo Motorsport.

Red Bull KTM Ajo’s Arthur Sissis is targeting a finish within the top 10 at this weekend’s Spanish grand prix, the Australian eager to erase memories of a costly crash at the Jerez circuit last year.

The Moto3 runner was dicing with the leaders in the top four before a crash ended his hopes, and redemption is high on his list of priorities for the third round of the championship.

Sissis salvaged 12th place after the two-part race at Austin’s Circuit of the Americas, and said he was aiming for further improvement at a circuit both he and the team know well.

”After the race in Austin, I’m raring to get back on the bike,” explained Sissis. “Jerez has slow and fast corners and I like it a lot.

“I have mixed feelings about my previous visits there, because last season I crashed when fourth, but it is also where I took my first victory in the Red Bull Rookies Cup, back in 2011.”

The promising Aussie said he felt he could go even faster than his pre-season testing form after steady progress on the bike over the first two rounds.

“I don’t know if the times will be much different to the preseason tests, but if the weather improves – and with the advances that we have made over the past two races – they will be faster,” he said.

“The aim in the race is to keep improving. Riding with the lead group will be difficult, but placing in the top six or seven would be a good result.”

Sissis sits eighth on the Moto3 ladder, scoring 12 points following the second of 18 grands prix for the 2013 season.