Lorenzo on pole as rivals stumble in Jerez qualifying 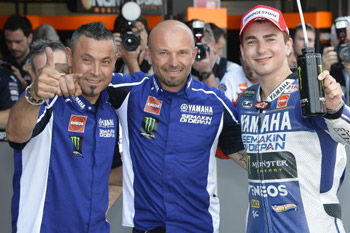 Jorge Lorenzo will start from pole for his home grand prix, the Yamaha Factory Racing rider clearly quickest at Jerez as his closest challengers all suffered crashes throughout the day.

Lorenzo, who today celebrates his 26th birthday, set a 1m38.673 lap in the Q2 session to better Dani Pedrosa’s time by a margin of three-tenths of a second.

“I’m happy with this pole position, it’s a good present for my birthday!” said Lorenzo. “I knew the track was not perfect, it’s very warm and there were a lot of crashes in the previous qualifying.

“I just tried to make the perfect lap, unfortunately I couldn’t, I made a mistake in two braking zones and went wide and lost some tenths.

“Anyway, in the other corners I was really quick and at the limit so it was enough to make it.

“It’s going to be tough tomorrow, normally the lap time you make for qualifying you cant repeat in another time because the tyre drops.

Repsol Honda’s Pedrosa lost some momentum when he crashed during the session, while teammate Marc Marquez, who qualified third, was also on the chase after crashing during free practice.

Despite the crash, Pedrosa was in high spirits, pleased with the performance of the factory RC213V to that point.

“The session went well, but at the end I had a crash in turn eight, as I maybe pushed a little too hard and lost the front,” he explained.

“We’ve ridden well all weekend and the bike is working great, so we are hoping that tomorrow we can continue in the same way. Pace is the most important thing and I hope to get a good start and have a strong race.”

Monster Tech 3 Yamaha’s Cal Crutchlow continued his solid run from day one, though he would have to contend with crashes in practice and qualifying which afforded his rivals a slight advantage. He was fourth quickest and again the best-placed satellite entry of any team.

Valentino Rossi, the fifth quickest qualifier, was lucky to escape unscathed when he crashed in dramatic fashion, destroying his YZR-M1 in the process.

Tenth place on the grid goes to the first CRT machine home, Avintia Blunsens’ Hector Barbera, despite a late crash.

Australia’s Bryan Staring made solid gains in his second day at the Jerez circuit, qualifying 18th for the race, his best position in MotoGP thus far.

“I am happy because we have secured our best grid position of the season so far,” said the GO&FUN Gresini CRT-mounted Staring.

“I feel we have made progress even though we still have plenty of room for improvement and I’m hoping we can take another step forward in the race tomorrow.

“I have to thank the team for helping us so much and for giving me the time I need to improve.”

Esteve Rabat reversed the running order from day one to secure his first Moto2 pole position, holding out Scott Redding and Takaaki Nakagami.

Arthur Sissis made some gains after practice and will set off in Sunday’s race from position 14.