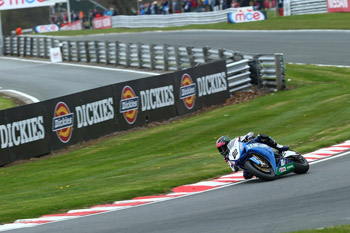 Samsung Honda’s Alex Lowes on his way to pole position during the Extreme Qualifying session.

Alex Lowes secured pole position for the Bank Holiday Monday third round of the MCE Insurance British Superbike Championship at Oulton Park as he set the fastest lap of the Cheshire circuit since the change in technical regulations.

Lowes had been on the pace across the weekend but he slashed the time when it mattered most to power ahead of triple champion and current series leader, Shane Byrne, aboard the Rapid Solicitors Kawasaki.

Lowes’ 1m34.834s lap saw him secure his second consecutive pole position for the season, and sets him up solidly for the races ahead.

“That was a pretty good lap although I never expected to be able to set a time in the 34s – that is a credit to how well the bike works,” said Lowes.

“I am feeling good for the races, tyre life is good, the bike is fantastic, so now it is down to me but there will be nothing easy out there with so many good riders.”

Byrne is determined to hit back in the races after missing out on the pole position.

“I’m not here to finish second – we have done a lot of work this weekend so we are ready for the races,” said Byrne. “That was probably one of my fastest laps around here and I couldn’t believe it when I saw P2 on my pit board.”

Aussie Josh Brookes set the third fastest time, and said he was fairly happy with the performance despite some struggle to find an ideal setup on the Tyco Suzuki.

“We were lacking a bit through free practice and struggling to get the bike to do what I wanted it to do,” said Brookes.

“Strangely enough we’ve looked over settings we tried last year that didn’t quite work, but with the move to Ohlins this year, and some other information we have looked over, they seem to be working for us this weekend.

“It now means we have a new bank of adjustments to try for tomorrow.”

Keith Farmer rounded out the front row abord the second Rapid Solicitors Kawasaki, with the fourth row to feature the Buildbase BMW of Jon Kirkham, the Quattro Plant Kawasaki of Chris Walker, the Bathams Honda of Tommy Bridewell and the Lloyd’s British GBMoto Honda of Peter Hickman.

Josh Waters will start from 17th aboard the Milwaukee Yamaha, unhappy with the final qualifying result after a raft of changes to refine the bike.

“I am obviously disappointed with qualifying because that isn’t where we want to be,” said Waters. “We had moved forward over the weekend but it just didn’t come together when we needed it to.

“We made some changes for qualifying which we thought would be heaps better but it is always that fine balance, which today just didn’t pay off for us.”

The opening stanza of the Supersport class saw Stuart Easton aboard the Mar-Train Yamaha claim sprint race honours ahead of Alastair Seeley and Australia’s Billy McConnell.

Fellow Australian and Triumph pilot Glen Richards was fourth, with Jason O’Halloran riding to an eighth place finish aboard his Samsung Honda.

In the Superstock 1000 class, pole position went to Hudson Kennaugh from Filip Backlund and Victor Cox, while Jordan Simpkin, Tim Hastings and James Lodge are the top three qualifiers ahead of the next Superstock 600 bout.

Levi Day continued his run of strong form, qualifying seventh on the Moto-Breakers Kawasaki, while Mark Wilkinson will make a mid-field start from 21st aboard the Seton Tuning Yamaha.