Holland back on the Formula Oz podium at Wakefield Park 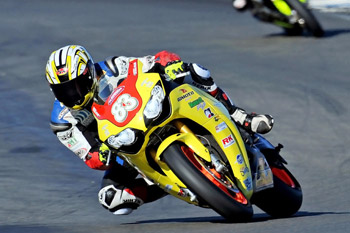 Russell Holland rode consistently at Wakefield Park to finish on the podium for the round.

The 2006 Australian Superbike Championship runner-up and regular on the World Superbike stage is re-discovering his passion for the sport, and with it, his customary pace.

Holland rode his distinct yellow Fireblade to third position in Saturday’s FX-Nationals meeting, improving one place on each outing to finish the final race on the podium.

He returned on Sunday to make even more ground, taking a fourth place and two thirds to again finish the round third overall.

“Looking back on the last race I can say it was a good weekend,” said Holland. “We ended up third and we fought for second.

“I am really happy with the setup of the bike, it’s not my favourite circuit, even though I got close to the pace fairly quickly, it was difficult to find the last bit to be competitive.”

Despite not racing the championship opener at Sydney Motorsport Park, Holland has climbed to fifth on the FX-Superbike Formula Oz class standings, and is just 14 points away from a top three spot.

The Yamaha Racing Team’s Kevin Curtain continues to control proceedings in the class, using a buffer built from two clean sweeps at the start of the year to protect his points lead after a crash-affected weekend at Wakefield Park.