Australia's Anthony West struggles with handling issues but battles to a top 12 in Jerez. 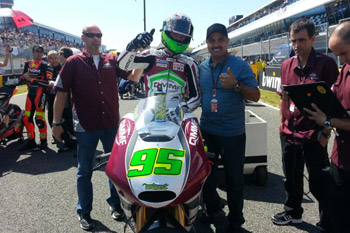 Anthony West retains a positive outlook despite the difficulties he faces on the Speed Up chassis. Image: QMMF.com

Australia’s sole Moto2 man Anthony West is optimistic that a two-day test will help his team to solve some of the issues he continues to face aboard the Speed Up chassis, with problems encountered at Austin rearing their head again at Jerez.

In spite of the difficulties, West managed a solid 10th place in qualifying, though progress in the race was difficult, compounded by an aggressive overtake from Simone Corsi which forced the QMMF Racing Team rider wide.

“I didn’t have the best start, but I was able to get back into a similar position from where I started,” recalled West. “I was tenth or eleventh on the first lap and I felt comfortable enough on the bike to try and catch the two guys in front of me.

“I was just getting into the rhythm of the race when Corsi passed me. It was not a clean move, he pushed me wide off the track and as a consequence, I lost contact to the two guys in front of me.”

As he did in the United States, West had a solid handle on the bike and the pace to stay within striking distance, but felt the recurring handling issues let him down once again.

“The whole race I could see them, they were just there, but I couldn’t catch them,” he said. “It was the best pace I could do with the bike because it didn’t feel as strong as I expected it to be.

“I really struggled a lot. I am lacking front end feel and I don’t have enough grip on the corner exits, which is why Tom Luthi got me in the end – he just opened the throttle and pulled away.”

He consolidated for a 12th place finish, and now sits in 13th place on the world championship ladder.

Despite the trying times, West is positive that some headway can be made with handling prior to the next Moto2 outing in France.

“We know what our issues are, which is why we are going to test in Portugal on Tuesday and Wednesday, trying to fix them and to return stronger at Le Mans.”