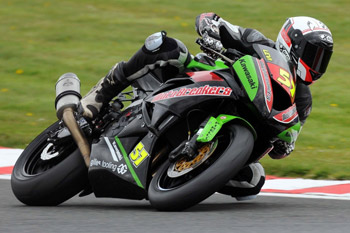 Moto-Breakers Kawasaki’s Levi Day has identified qualifying as a key area of focus as he looks to build on a season-best finish of fifth place at the weekend’s third round of British Superstock 600 running at Oulton Park.

The Australian rider is quickly making his mark in the talent-laden class, finishing in ninth place at the season opener at Brands Hatch and 11th at Thruxton.

Day was able to verify a wet setting on the ZX-6R in free practice before setting his sights on a top qualifying time. He was fifth after the first session, and battled to set a lap in traffic in the second, climbing from 14th to seventh on his final flyer of the day.

As the race got underway he was able to move forward to fourth, involved in a spirited scrap for the podium as the laps ticked over.

“I was running well with the front-runners but I got pushed out really wide half way through the race and I rolled off and lost a couple of places,” said Day. “I had to settle back down and regroup but by this point the leading bunch had made a break.

“I’m really pleased with my result at Oulton, it’s a great track and was mega fun to ride and the result showed that.

“I was able to set some really good and consistent lap times which helped me push my way forwards and get a healthy solid result.”

He believes he can be a consistent podium threat if his energy is not expended trying to make up positions early in the race.

“I know now I am able to run at the same pace as the front runners so I have to ensure my qualifying is good and try and get some more points on the board,” he said.

“I know we are able to continue this positive form and keep improving.”

Day banked his first double-digit points on the weekend which moves him to seventh outright in the class.