BMW and Aprilia on top of the podium in a drama-filled day in Northern Italy. 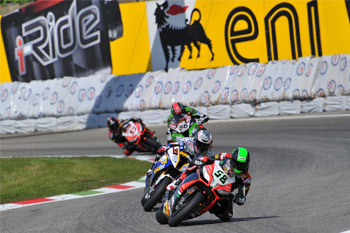 Marco Melandri and Eugene Laverty shared race wins at Italy’s iconic Monza circuit as a quartet of riders broke away from the pack to challenge for podium placings at the fourth round of the World Superbike Championship.

Kawasaki’s Tom Sykes was on pole, and in the thick of action in race one. Joining him in the breakaway pack was the Aprilia Racing Team pairing of Eugene Laverty and Sylvain Guintoli and the BMW Motorrad GoldBet machine of Marco Melandri.

Each rider had his turn at leading the race, with Laverty leading the bulk of early running before his RSV4 Factory teammate took charge on lap eight.

Melandri then showed his hand, stealing the lead for a brief period before Sykes resumed control. The top trio would continue to swap spots until the final lap, where the BMW of Melandri was strongest.

The Italian passed Sykes for second at the first turn, then went head-to-head with Laverty, displacing the Aprilia rider at the final turn.

Melandri won by 0.085 seconds, ahead of Sykes who got a good run on Laverty onto the front straight.

Guintoli stayed close to the top trio but was not in the fight during the defining moments, still picking up solid points in fourth.

Mark Aitchison was a courageous 16th on the Effenbert Liberty Ducati which had few answers to the high-speed sections of the circuit.

Losing out to Melandri in the final moments of the morning race, Laverty would not be denied the win in race two.

The Aprilia Racing teammates swapped spots to lead all 18 laps of the race, Laverty defending a fast-finishing Melandri to erase the earlier disappointment.

Melandri threw everything at a double victory, setting the fastest lap of the race on the penultimate tour, but Laverty held on by 0.143 seconds to record his third win of the season.

Sykes completed the podium ahead of Guintoli, though a series of appeals following the conclusion mean the result is still provisional.

The Kawasaki rider ran off track at turn five, and re-joined after using the run-off area while maintaining the same pace.

Aprilia appealed the result, which saw Sykes demoted one place, but Kawasaki lodged their own protest and after consideration of race footage and sector times, their man was moved back onto the podium.

An international disciplinary court can still hear further appeals up to five days after the fact, meaning Aprilia may still challenge the decision.

High-profile retirements included Davies, who crashed at turn five, Jonathan Rea, who retired with clutch problems, and Jules Cluzel, who lost the rear and also crashed out of the running.

Guintoli’s points window at the front of the field was closed slightly by his teammate, now just 13 points away. Sykes moved to outright third, within five points of Laverty, while Melandri climbed to fourth and Davies dropped to fifth.

Yakhnich Motorsport Yamaha’s Sam Lowes won a shortened Supersport affair, making up an incredible three places in a single section of track to ride from outside podium contention into the lead on the final lap.

The race was run over just 10 laps after three red-flag interruptions, one of which forced the postponement of the race to ensure other categories could run to schedule.

Lowes won by a 0.798 second margin from Kawasaki’s Florian Marino and Lorenzo Zanetti, with Ricardo Russo and Kev Coghlan completing the top five.

Reigning champion Kenan Sofuoglu crashed out of the race lead on lap four, while the non-start of teammate Fabien Foret, the previous points leader, underlined a difficult day.

Foret was one of a number of frontrunners who scored no points at Monza, along with Michael van der Mark. Both riders managed to hold onto top three points placings despite their DNFs.

Australia’s Matt Davies rode to a solid 16th place finish, missing out on points by less than two-tenths of a second. Mitchell Carr was 25th after a difficult weekend.

The result sees Lowes leap ahead on the standings, 16 points clear of Foret, with van der Mark five points further in arrears.

The Superstock 1000 race was an action-packed affair also, reduced to seven laps following crashes from the BMW Motorrad GoldBet pairing of Greg Gildenhuys and points leader Sylvain Barrier, along with Leandro Mercado.

Canepa’s podium finish sees him take the lead of the championship, with Barrier’s misfortune sending him to third. La Marra made up a place, and is now second.

The European Junior Cup again saw a frenetic battle for the lead, with no less than 10 riders in the mix as the last lap board was shown.

Australia’s Zac Levy was in line for the win in the closing stages but the drag to the line saw him lose a small amount of ground. He would eventually finish a strong fourth, his best result in the championship to date.

Michael Canducci maintains the points lead after the third round, with Lewis second and Anne third. Levy bounces back to seventh on the standings after a competitive weekend on the CBR500R.