Melandri capitalises on BMW’s speed in race one photo finish

Marco Melandri tells of his confidence in the S 1000 RR's power as he races to the narrowest of wins. 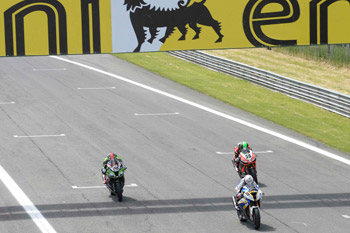 Marco Melandri edges his BMW ahead in the race one thriller at Monza. Image: WorldSBK.com.

BMW Motorrad GoldBet pilot Marco Melandri was relentless as he raced towards the finish line in the opening Monza World Superbike showdown, knowing his bike had the necessary narrow speed advantage to displace his rivals at the crucial moment.

Melandri was instantly up to speed at his home track on Friday, harnessing the power of the BMW S 1000 RR through Monza’s series sweeping corners and onto the straights.

Race one saw him involved in a spirited duel for position with Eugene Laverty, Tom Sykes and Sylvain Guintoli, with the lead changing hands a number of times in the final stages.

It was Melandri’s belief and his bike’s drive to the line that saw him snatch the victory from Sykes in a photo finish.

“Race one was unbelievable,” said Melandri. “I knew that my race pace was quite good, even if we struggled a bit in qualifying.

“When we started, I knew that it would be very tough until the last corner. When Eugene passed me on the last lap, I thought it would be impossible to pass him back again, because he was very good in the turns and he was pulling away.

“But in the last corner I was quite close, I knew that I could go a little bit faster than the others and so I overtook him and, even though I was a little bit wide, I kept full throttle until the finish line.

“Until the chequered flag, I was talking to my RR, telling her ‘go, go, go’ – that was incredible.”

Melandri displaced Sykes by just 0.085 seconds, with Laverty just a tenth of a second behind.

Laverty, determined to fight for a higher step of the podium, was too good in the stretch to home in race two, with Melandri unable to find a way around. He would finish just 0.143 seconds shy of a second win, though collected another strong points haul to add to his tally.

“It was an unbelievable day for me,” added Melandri. “To finish first and second here in Monza is just awesome and it feels great after we had a difficult start to the season.

“Now I am confident because I feel that the feeling with the bike is coming back. I can brake and go into corners aggressively, it is my riding style.

“I am sure that from now on we can fight with the top guys at every race. Thanks a lot to my team because they are working so hard and I am sure our championship will start now.”

Melandri moves to fourth overall on the standings after round four, though he still has some ground to make on the lead Aprilia pairing of Guintoli and Laverty, as well as Sykes, who have scored solid points and podiums at each outing so far.

There was no fairytale finish for Melandri’s teammate Chaz Davies, who was fifth in the opening race before crashing out of the second, severely denting his championship hopes after a promising start.