Honda rookie aware of the challenge he faces without track time on current MotoGP machine. 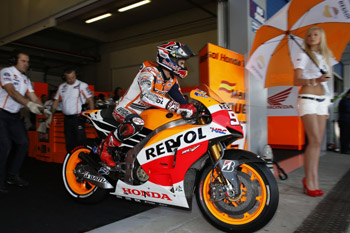 Marc Marquez is aiming to find a suitable setup early at Le Mans.

MotoGP World Championship leader Marc Marquez insists he is going to this weekend’s Le Mans grand prix “starting from zero” having never ridden his Repsol Honda RC213V at the circuit.

The rookie sensation, who has finished on all three steps of the podium in the first three rounds, is hoping to find favourable conditions in France to allow him to establish a setting for dry track running.

Marquez crashed out of last year’s Moto2 race when running fourth, with the wet conditions playing havoc in both feeder categories.

“We go to Le Mans and again we arrive there starting from zero, as I haven’t done any tests there,” explained Marquez. “I’ll do my best and I’ll try to make the most of the situation.

“I hope it doesn’t rain so we can prepare the bike on a dry track, this is very important to find the right setup.”

Though he has had a dream run to date, Marquez is aware that his rivals, including teammate Dani Pedrosa, have the upper-hand in terms of MotoGP experience on the next series of tracks on the calendar.

“I’m very happy at the moment but we have to keep our feet on the ground as the coming circuits are new for me in MotoGP,” continued Marquez.

“A huge part of our success in this first part of the season is down to the help that Honda and the team have given me and it has helped my riding a lot.”

The 20-year-old heads to round four with a three-point advantage over Pedrosa, with Yamaha’s Jorge Lorenzo a further point adrift.