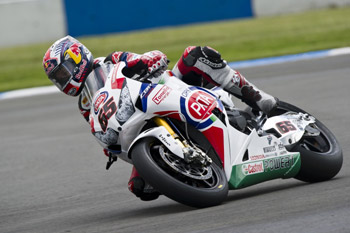 Jonathan Rea had hoped for a podium at his home event but it didn’t eventuate.

With teammate Leon Haslam a non-starter due to the extent of his injuries, the burden of expectation was placed on the shoulders of Rea, who has taken the early season setbacks in his stride and hoped to make some forward progress at his home round.

The opening race looked certain to be a positive one for Rea who had similar pace to the eventual winner Tom Sykes.

A podium place would ultimately go begging in the final stages as he became a ‘sitting duck’ to the advances of the factory Aprilia riders Sylvain Guintoli and Eugene Laverty.

“When I was behind Tom Sykes early in the race I wanted to go forward but he was doing absolutely nothing wrong,” said Rea. “I was happy to know I could follow him at that pace for a time.

“We were going well until the middle part of the first race and then the electronics were cutting in too aggressively.

“It was a little bit frustrating because I felt like a sitting duck. I even struggled to compete with Laverty and Guintoli as they came past.”

The break between races was largely unproductive for the Honda squad, and immediately Rea became aware of a traction control issue which would ultimately render him defenceless.

“Race two was a complete disaster,” said Rea. “Already, on the sighting lap, I told the guys that we had a sensor problem on the traction control. They said there wasn’t enough time to fix it so I went out on a bike that I was really unsure of.

“In reality it was cutting way, way too much power and I even tried to turn the traction control off, but it wouldn’t turn completely off.

“I’m really frustrated after all the work we’ve done. We struggled for dry time at the start of the weekend but made some inroads during warm-up this morning and I felt good in race one.

“I feel like we should have been on the podium twice today.”

A relative veteran of WSBK, the Ulsterman is itching to add to his 30-podium tally when the championship resumes at Portimao in Portugal in nine days’ time.