Yamaha fill top three placings as mixed conditions cause havoc across the classes. 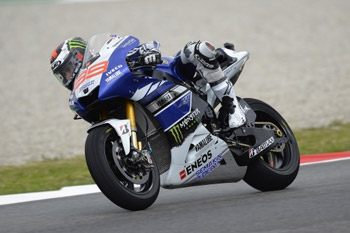 Jorge Lorenzo topped the times for Yamaha on day one of the Italian Grand Prix. Image: Yamaha Racing.

Jorge Lorenzo led an important 1-2 finish for the Yamaha Factory Racing team on the opening day of the outfit’s home grand prix at the Mugello circuit in Italy.

The conditions in the opening free practice saw many of the frontrunners err on the side of caution, and as a result, a number of new riders were able to lay claim to a top five time.

Positions four and five belonged to the CRT machines of Karel Abraham (Cardion AB Motoracing) and Yonny Hernandez (Paul Bird Motorsport) who found their footing in tricky wet conditions as many of the regular frontrunners opted against any risk.

The slippery surface saw a number off-track excursions and crashes, with Ducati’s Andrea Dovizioso taken to the medical centre to assess a possible cervical spine injury.

Order was restored in the afternoon as Lorenzo went fastest ahead of Valentino Rossi, with Cal Crutchlow making it a Yamaha top three on his Monster Tech3 mount.

Lorenzo was satisfied with the result after managing the mixed conditions on the opening day well.

“In the morning it was wet and bad conditions so we preferred to not exit at the end of FP1 with the slick tyres as we thought the track was dangerous. We had to wait for the afternoon and dry conditions,” explained Lorenzo.

“From the beginning the Yamaha riders were very strong and competitive which means the track is working well for us this year.

“We have to wait for the improvement of our rivals and the possible change in weather that can change our performance but for the moment we are very competitive and happy.”

Two dramatic crashes characterised the afternoon session, with Marquez and Crutchlow’s teammate Bradley Smith both coming unstuck as they pushed hard for a fast lap.

Marquez lost control of his Honda on the main straight and hit the grass verge against a wall at close to 340 kilometres per hour. He jumped from his bike but slid into the gravel trap still at high speed, and was lucky to walk away relatively unscathed.

“Just after the hill on the straight, I grabbed for the brakes but I (lost) the front,” said Marquez. “I tried to save it but the bike was pulling me towards the wall, so I jumped from the bike to avoid hitting it.

“I hit my chin hard and strained my neck quite badly; I also have some contusions to my right shoulder, arm and leg, but other than that I’m okay.”

In his incident, Smith hit the deck hard on his left hand side but has been given clearance to continue, diagnosed with a scaphoid fracture to his left wrist and a minor cut to one of his fingers.

The pace in the second session was largely improved upon the first as the track dried and sunshine peeked through.

Points leader Scott Redding was around half-a-second off the pace at the conclusion of the day, finishing seventh fastest on his Marc VDS machine. Australia’s Ant West was 25th.