Marquez and Smith given the all-clear for Catalunya

Repsol Honda's Marc Marquez and Monster Tech3 Yamaha's Bradley Smith have both been given the all-clear for the Catalan Grand Prix. 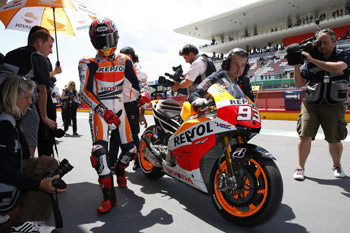 Marc Marquez should be at full health for the next MotoGP round.

Repsol Honda’s Marc Marquez and Monster Tech3 Yamaha’s Bradley Smith have both been given the all-clear for the Catalan Grand Prix following intensive medical assessments post-Mugello.

The rookie riders were involved in separate heavy crashes throughout the weekend of the Italian Grand Prix, and though both able to make the start, were forced to race at a high level of discomfort.

Marquez made a bee-line for a Barcelona hospital on Monday morning where a doctor was able to confirm he had sustained no further injuries than first diagnosed following his 337.9 kilometre per hour, 25G crash on the main straight.

“We weren’t convinced about the condition of his right shoulder,” explained Dr. Xavier Mir. “We have performed some more detailed x-rays on him, which confirm that the injury at the upper point of his humerus is minimal – a small fissure.

“As such injuries can compromise the condition of tendons in the shoulder, we also gave him a Doppler ultrasound scan. This ruled out any broken tendons.

“What he does have is a small inflammation of the tendons, but this is something that can be treated in a matter of days with physiotherapy.”

Smith visited a hand specialist in San Marino to undergo further assessment of the injury caused when his left hand was caught beneath his bike when he crashed in Free Practice two.

“The good news is I will be fit to ride again at the next round at Barcelona,” said Smith. “The bad news is I have a cracked bone in the scaphoid of my left wrist and the little finger on my left hand will be permanently bent.

“The doctors were unable to carry out the planned skin graft operation because the skin was so badly damaged around the little finger, but they are confident it will heal – as will the crack in the wrist.”

“Rather than a skin graft, it was decided to replace the extension tendon I damaged with a wire. The finger has been pulled as tight as possible and the hope now is that the skin naturally heals itself.”

Both riders will main a rigorous physiotherapy program to ensure they are in the best condition possible for round six of the season at Barcelona on 16 June.