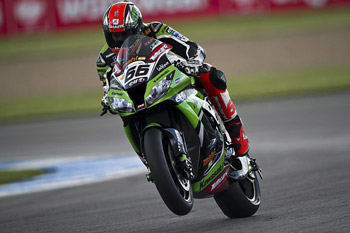 Tom Sykes says a unified front by his Kawasaki Racing Team has been a telling factor thus far in 2013.

World Superbike frontrunner Tom Sykes says his Kawasaki Racing Team deserves its share of the credit for a strong start to the 2013 season which sees him sitting within single digits of the championship lead.

Briton Sykes has won three of the past six races, including two wins at home in Donington, and says he now knows just how important a unified team can be.

“Racing is a massive team effort nowadays,” said Sykes. “A few years ago I thought that a strong rider could always make that last little bit of difference, and of course he still can, but I have learned a bit more since then.

“I think it is clear to understand that not only do you need to be a good rider you also need every single person involved to be in good working order. Luckily I have a very good blend of people around me and we are all working at a high level.”

Sykes has been on the podium on seven of 10 possible occasions thus far, and has been the dominant rider in Superpole with four pole positions.

Portimao in Portugal is a regular testing track for many World Superbike teams, but not Kawasaki. Despite this, Sykes, who won the first race of the event last year, feels he can be strong.

“Both the Ninja ZX-10R and I have been fast in Portugal recently so I’m honestly really looking forward to it,” he continued. “Expectations will be high of course but I feel we have a good package to keep working forward with.

“I think Portimao is even more intense than Donington, very physical for the arms. The hills and so on are a bit extreme, almost too much but the beauty is that it is the same for everybody.

“I am sure we can get the Kawasaki working strongly and we need to keep the momentum going there.”

The 27-year-old has whittled the lead of Aprilia Racing Team rider Sylvain Guintoli down to just four points, and will be amongst the favourites to challenge for race wins at the Portimao track.