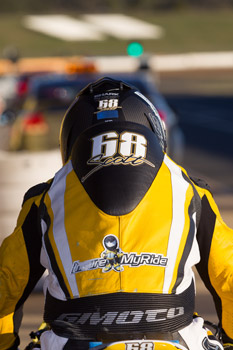 InsureMyRide Racing’s Glenn Scott is pleased with the progress of his fledgling team and says he will take plenty of positives from another strong showing at round three of the Australian Superbike Championship (ASBK).

Scott rode to seventh and eighth places across races one and two respectively in Ipswich, and the consistent start to his rookie season sees him currently in the lead of the privateer ranks.

The New South Wales-based rider attributed his solid start to the season to the tireless work of the team, which underwent a significant restructure prior to the Queensland Raceway weekend.

“Our hard work leading up to this round really paid off on Sunday with some fun close racing,” said Scott.

“We managed to find a good set up on Friday practice with the help of Motologic, this allowed me to really focus on my riding and become one with the bike.

“I really want to thank them and Stephen Mion (personal trainer) for our success this weekend, it certainly was a team effort.”

Scott is on track today at the Sydney Motorsport Park test and says he is excited for the upcoming double-header event on home soil on 1-4 August.

“There are plenty of positives to take away from this weekend, we are certainly finding our feet as a team in the Australian Superbike paddock and I am excited for the next round of the championship,” he added.

“I’m more determined than ever to work harder in this month between rounds, we are improving every time we jump on the bike and I can’t wait to get to Sydney to prove we can battle the top five factory boys.”

He trails Team Honda’s Jamie Stauffer by 12 points and has a handy buffer of five points over Racers Edge Suzuki rider Beau Beaton.