Spanish rider confident he has fully-recovered from the shoulder injury that has plagued him and hopes to score solid results. 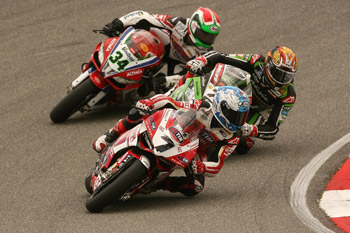 Carlos Checa is hopeful that Imola can mark a significant turnaround for his 2013 season. Image: Ducati Alstare.

Team Ducati Alstare’s Carlos Checa is confident he will be at one-hundred percent fitness in time for this weekend’s Imola round of the World Superbike Championship.

Checa has won five of the last six races held at the Italian venue and feels he can be competitive at the series’ seventh round.

“Now my shoulder condition is quite good (not yet for climbing or swimming), still if I do max extension is bit weak but for bike riding I don’t need that shoulder position,” said Checa.

“I’m quite confident that the long break and all the work I’ve been doing will allow me to be one hundred percent fit for the round.”

Checa’s return to full health coincides with a significant step forward for Ducati, with the FIM permitting the removal of a performance-stifling air restrictor from the 1199 Panigale R from this round onwards.

Despite the positive development, Checa knows the team will first have to bridge the gap to their rivals, including the consistent Aprilia pairing, Kawasaki’s Tom Sykes and the factory BMW machines.

“Before winning we must close the gap with our rivals”, he added. “Imola will be good opportunity to get closer.

“I really like the track, it is quite technical with heavy braking, up & downhill sections and many chicanes.”

The decorated rider is yet to score a podium in 2013 and currently sits 13th in the championship.