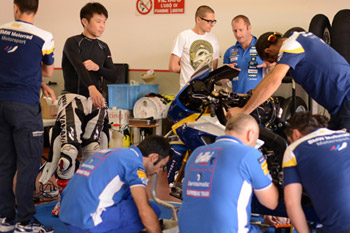 Nori Haga put the Grillini BMW through its paces at a test day at the Mugello circuit. Image: WorldSBK.com.

Three-time World Superbike Championship (WSBK) runner-up Noriyuki Haga has had a final shakedown of the Grillini Dentalmac BMW S 1000 RR he will campaign in a one-off return ride at Imola this week.

Haga stepped away from WSBK at the end of 2011, and hasn’t raced a motorcycle competitively since last October.

A 312-race veteran and winner on 43 occasions, Haga is optimistic about his chances this weekend and hoped to be able to deliver two solid finishes.

“First of all I would like to thank Feel Racing and Team Grillini Dentalmatic for the opportunity to ride the BMW S 1000 RR,” said Haga.

“The test at Mugello went really good and we were able to find a base set-up for the bike for the round at Imola.”

Haga completed 70 laps on the BMW, making the most of the clear conditions in order to prepare for what he acknowledges will be a tough one-off showing.

“I haven’t been racing since October of last year, but I hope to be quick enough, I’ll be doing my best and push hard during the whole weekend – I want to score a good result for the team and the fans,” he said.

The Grillini BMW Dentalmac squad will field Haga alongside regular rider Vittorio Iannuzzo, whose best result in 2013 is 11th place at Portimao.