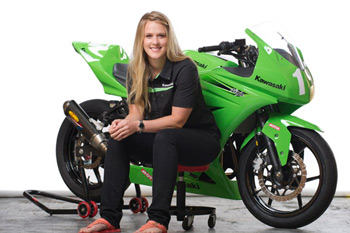 Kawasaki has confirmed official support for Sophie Lovett as the New South Wales-based talent takes her career to new heights in 2013.

A fixture in the Australian Superbike paddock for a number of years, Lovett made a significant breakthrough in winning the 2012 Prostock C/D grade championship and has returned in search of more success this season.

As well as seeking improved results in the Prostock category, Lovett is a favourite to take out the 250cc Production Women’s Class Championship following a solid victory at the opening round at Queensland Raceway a fortnight ago.

“Joining with Kawasaki has been a fantastic opportunity and will further enable me to achieve my goals of winning the ASBK Women’s championship and place top five in the B-Grade ASBK Prostock championship,” said Lovett.

“The Kawasaki Ninja is such a solid platform for a race bike as can be seen in the Prostock class where there are so many green bikes.”

The daughter of Aussie motorcycling great Phil Lovett, Sophie hopes her progress and results in the male-dominated sport can open the door for more females.

“I’m really looking forward to showing other ladies that if I can be out there racing, then they can too,” she added. “The Women’s 250cc Production class is a fantastic way for ladies who ride on the road to transition into an affordable racing class.

“As a Kawasaki supported racer and ambassador, I hope to raise the profile of female road riding and racing in Australia and hopefully bring more women into the male dominated sport.”