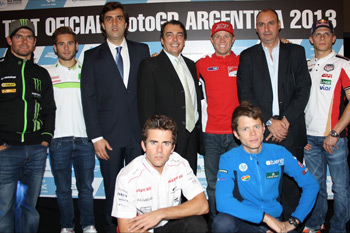 Riders and officials met with over 150 media personnel at the Argentine MotoGP test launch. Image: MotoGP.com.

MotoGP teams and riders are gathering in Argentina in preparation for this week’s two-day test at the Termas de Rio Hondo circuit, a vital step in the final stages of confirming the venue for the 2014 calendar.

The 4.8 kilometre track will be open for testing for two six-hour periods on Thursday and Friday, and the riders in attendance, including Monster Tech3 Yamaha’s Cal Crutchlow, looked forward to evaluating the brand new facility.

“It will be great to get there and finally try it out,” said Crutchlow. “Then we can go back and tell the other riders what we thought of the place.

“From what we have seen, I don’t think any improvements will need to be made because it looks like a fantastic facility and circuit, so we are looking forward to going and hopefully we can have two good days riding around the track to also give them some important information.”

The British rider said he had been “overwhelmed” by the interest levels in MotoGP in Argentina.

“The passion and enthusiasm for MotoGP here is infectious and it will be great to be back next year for the race,” he continued.

“South America is a key market for Yamaha and Dorna and the interest today proves why it is essential that there is a MotoGP race in this part of the world.”

LCR MotoGP man Stefan Bradl was another present for the official press briefing and said he felt the high-speed nature of the circuit would place particular emphasis on managing tyre wear.

“The layout of the circuit looks really fast,” said Bradl. “That can be really busy for the tyres because we will be on the edge, accelerating really hard for a long time.

“I can see some really fast corners, so I’m looking forward to seeing it and then testing on Thursday to get as much information as possible for next year.

“Probably one of the most important things is that we will be able to find out how the tyres will work.”

The FIM and Dorna Sports are currently in the concluding stages of the homologation process which will likely confirm the venue as part of the 2014 calendar.