Top three testing times and a winning record at the Norfolk circuit set Aussie rider up for successful weekend. 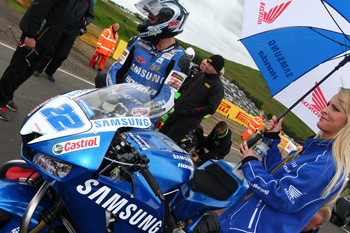 Strong testing form and a winning record at the Norfolk circuit have British Supersport Championship standout Jason O’Halloran upbeat about his chances at the weekend’s Snetterton round of the closely-contested series.

O’Halloran won last year’s Superstock 1000 race for his Samsung Honda team and hopes to show similar form on the CBR600RR after a rollercoaster start to his season.

The Australian rider can take confidence from last week’s test session at the circuit in which he finished the first two timed sessions third-fastest before going second-fastest in the final.

“Snetterton has been a good track for me in the past,” said O’Halloran. “We won the Superstock race last year and I am hoping that this weekend we can have two solid races and reward the team for their hard work so far this season.

“We had a decent test and realistically this should be a good event for us as we want to turn things around after some bad luck at Knockhill.”

O’Halloran was a non-finisher in both Scotland races. Fellow Aussie Glen Richards crashed and took O’Halloran with him on the warm-up lap in the sprint race before contact with another rider in the feature saw the Samsung Honda man out of the running without scoring a point.

Despite a difficult run of late, O’Halloran is still in the mix in eighth place on the championship standings, and in striking distance of the top five.