"It was absolutely mega to ride" says Brit Redding after putting the RGV500 through its paces. 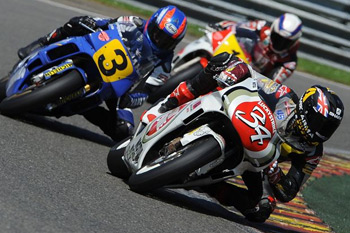 British rider Redding was just a year old when Schwantz was doing battle on the Suzuki, and with 19 years of technological advancements, the differences between Redding’s current four-stroke, 600cc machine and the two-stroke 498cc were many and varied.

“The bike was absolutely amazing,” described Redding. “Okay, the brakes weren’t great, but we were expecting that. The handling was incredible because the bike is so light; it was really easy to change direction.

“It accelerated hard too, with the front coming up in every gear. I didn’t need a rev counter; I just changed up whenever I felt the front wheel was high enough!

“There was a lot of power, but it was pretty controllable, nothing like the razor sharp powerband I was expecting. It turns like a 125 and was still pulling in sixth. They should bring these back. It was absolutely mega to ride!”

Redding featured in the 500GP parade alongside legends the likes of Giacomo Agostini, Phil Read, Wayne Gardner and Christian Sarron.

While it was meant to be a demonstration event, the racers’ instincts took over and resulted in a hearty 10-lap battle.

Not only had Redding never ridden the bike, he had never turned a lap of the imposing Spa circuit, but this didn’t deter him as he battled for the lead against eventual ‘winner’ Steve Plater.

“I got a good start to lead through Eau Rouge, but this was my first time on the track on two wheels, on a bike I only slung a leg over ten minutes beforehand,” explained Redding.

“The rest of the guys rode yesterday, so they had a bit of an advantage in the opening laps, but it didn’t take me long to get a feel for the bike and to figure out the lines.

“I managed to push my way back up into second and then had a great battle with Steve Plater over the last few laps.

“In the end I couldn’t quite find a way past him before the chequered flag, but second place isn’t too bad for my first outing on a 500GP bike!”

Schwantz won the 1994 British Grand Prix at Donington on the RGV500, the same circuit that Redding would experience his first grand prix win at some 14 years later, in 1998.

The Moto2 points leader returns his focus to the task at hand following the event. He is seeking to increase his points lead in the class as the battle between class fast men resumes at the Sachsenring.