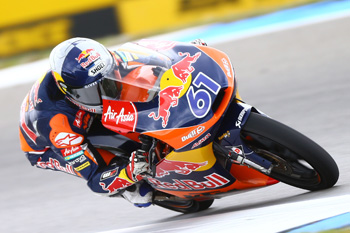 Arthur Sissis believes better qualifying performances will allow him to battle with the Moto3 leaders.

Sissis factored within the front-runners in the free practice session immediately prior to qualifying at the Sachsenring but some minor changes to the setup of his bike saw him lose feeling and drift to 15th place in qualifying.

“We made a few small adjustments to the setup, but I noticed them more than I expected,” said Sissis after the session. “That’s why, when we put the new tyres on, I was unable to push to the maximum.”

The Australian was competitive in race trim, able to make good progress throughout the race to record his third consecutive top 10 finish.

He did, however, underline the importance of improving his qualifying pace after feeling he was disadvantaged by his start from the fifth row of the grid.

“It was not a bad race, but the problem is that starting from the fifteenth position really was a handicap,” explained Sissis.

“The opening laps did not go quite right, I lost a lot of time, but when I caught the group I I felt better and I rode pretty well after that.

“(Jonas) Folger was not far away from us and when I caught him I tried to pass but it was not possible.

“I believe that if we had started from a better grid position, I could fight to finish higher up. Now I have to fight to get a better qualifying spot for the next race.”

The 18-year-old’s best qualifying position thus far has been a ninth place in the Netherlands. From eight starts he averages a qualifying performance of 14.124.

Consistency has been a telling factor in his 2013 campaign, with points-paying finishes in every race keeping him in touch with the leaders, currently placed 12th.