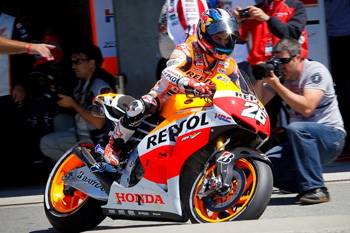 The collarbone fracture suffered by Repsol Honda’s Dani Pedrosa has been revealed as more extensive than first thought, with three-dimensional CAT scans post the Laguna Seca weekend showing a complete break as opposed to the partial break initially diagnosed.

Pedrosa, who battled to fifth place in the race, indicated that his planned rehabilitation program prior to the Indianapolis raced would likely remain unaffected, with the bone still in alignment and not requiring surgery as opposed to the more significant injuries suffered by Jorge Lorenzo who underwent multiple procedures.

“It was important to know how the bone was, so yesterday, I had a 3D CAT three-dimensional CT scan that confirmed something that did not show up on the first x-rays because of the swelling and because sometimes, there are fractures that give you a restricted view on an x-ray,” explained Pedrosa.

“With this 3D CAT three-dimensional CT scan, a week later, we have been able to see that the fracture is a complete fracture. The important thing is the collarbone has not been displaced and that after the effort it is still well aligned, so I will not need to have an operation.”

The title hopeful finished the second US Grand Prix ahead of rival Lorenzo, and he feels that the aptly-timed summer break will give him a good chance to recover and be back to full fitness.

“This is good news, all things considered, so two weeks from now, I will have another medical checkup and I am going to combine the holidays with physiotherapy sessions to recover and reach Indianapolis on form,” added Pedrosa.

Pedrosa’s top five finish netted him 11 points towards his title campaign and importantly, keeps him within 16 points of teammate Marc Marquez who took maximum points from both the Sachsenring and Laguna Seca.