Multiple world champion is having fun and results will follow. 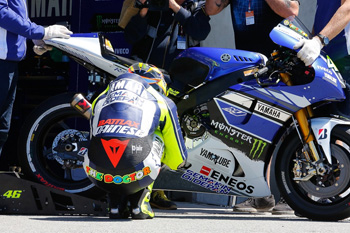 It would appear Valentino Rossi and the Yamaha M1 are back on speaking terms following three consecutive podiums. Image: MotoGP.com.

A revitalised Valentino Rossi will continue to grow in confidence as the season progresses, according to Yamaha Factory Racing managing director Lin Jarvis.

Jarvis said Rossi’s return to the YZR-M1 he had enjoyed so much success on started well, but admitted the team had to work hard to find answers to the Italian’s form slump early in the piece.

“We saw at the opening round how he started the season brilliantly in Qatar, coming from further down the field and pushing to finally get that second place,” said Jarvis.

“Then we had a bit of a dip, Valentino lost confidence on the bike on some tracks and he struggled on braking and corner entry, which are normally his strongest points.

“Then we had a key test at Aragon where we found a change to the bike which gave him confidence.”

With his testing pace verified, Rossi returned to his customary level and it took little time for him to break through for his first win which came in the Netherlands.

With his winning ways restored, Jarvis believes the Rossi of old is back, and feels when the Italian superstar is having fun, results will flow.

“We’ve seen him revitalized,” continued Jarvis. “He raced at Assen and took his win – his first win for two and a half years.

“It was fabulous for him and fabulous for the sport. I just remember that incredible reaction of the crowd to see him win again.

“He is competitive again, so we’re on track, we’re on schedule. He’s enjoying it and having fun.”

Following his win at the Assen TT, Rossi went on to finish third at the Sachsenring and Laguna Seca, and was able to peg a place back on Cal Crutchlow on the championship ladder.