A commanding clean sweep of all four Australian Superbike Championship races at Sydney Motorsport Park has Team Suzuki's Wayne Maxwell charting a course towards a potential maiden title in the premier class. 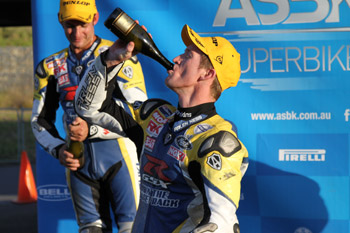 A commanding clean sweep of all four Australian Superbike Championship races at Sydney Motorsport Park has Team Suzuki’s Wayne Maxwell charting a course towards a potential maiden title in the premier class.

The Team Suzuki crew turned out a bike that the Victorian felt a special synergy with, building upon Maxwell’s timesheet-topping effort at the pre-event test session at the end of June.

Bugden pushed him to the line in the second race, but Maxwell had the edge at the conclusion, winning by 0.149s and claiming the round victory.

The double-header weekend meant 100 points were on the line across the four races, and Maxwell went on to win both Sunday contests to claim the maximum haul.

“What a weekend it was for Team Suzuki,” Maxwell said. “The Yoshimura-powered GSX-R1000 worked awesome in all four races, so to come away with four out of four shows how well the team and the bike are working.

The 30-year-old, twice a runner-up in the championship, said he could not envision coming away from the weekend with such success.

“We came in 14 points behind and leave this weekend with a 24-point lead in the championship, so it really is a dream come true,” he said.

“Obviously there’s a long way to go, so we’ll keep working hard and see what we can do in Darwin.”

Team Suzuki principal Phil Tainton was exceptionally pleased with the weekend’s results. Not only is Maxwell now in the title lead, Bugden’s solid performance brings him onto equal footing with Glenn Allerton in the title hunt, with the pair tied in second.

“It [the weekend] couldn’t have been much better,” said Tainton. “Wayne has been unbeatable, Robbie has been riding so well as well.

“We’re now first and tied for second in the championship, so it was a really important weekend to be successful with the double-header format. It was just fantastic.”