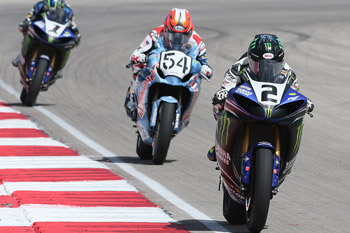 The recent efforts made by Herrin were evident as he led Saturday’s 16-lap race from start to finish.

He was shadowed by teammate and form runner Josh Hayes who came close but couldn’t find space to make a safe pass on his younger stablemate.

As the race wore on National Guard Jordan Suzuki’s Roger Hayden ranged up on Hayes and made his way by, setting up a shot at Herrin in the closing stages.

Hayden pressured Herrin heavily over the final lap but would ultimately come home second by a narrow 0.092-second margin, with Hayes salvaging third.

Outside the lead battle there was 14.575 seconds to fourth-placed Martin Cardenas, and another 15 seconds to fifth-placed Danny Eslick.

The second race saw uncharacteristic troubles for both leading Yamaha R1 riders, setting up a battle for the win between Cardenas and Hayden.

With Hayes crashing out of contention and Herrin battling a mechanical problem, the Suzuki GSX-R1000 rivals were left to duke it out to the finish line.

Hayden had been experiencing intermittent problems which reared their head just a few corners from the end of the race.

Cardenas had been in the lead and powered on, while Hayden coasted to second ahead of a recovering Herrin.

The Utah weekend sees the title race turned on its head, with Herrin moving into the lead, 9 points clear of Cardenas, and Hayes falling to third and a further 16 points away from his teammate.

Joe Roberts collected a narrow win in the opening Supersport race, edging his Honda home ahead of a group of Yamahas, lead by Wyatt Farris in second and Tomas Puerta in third.

Roberts made it two wins from two starts on Sunday, with Puerta and Farris swapping places to round out the event podium.