Positive three days of testing at Sepang satisfying for the Spaniard. 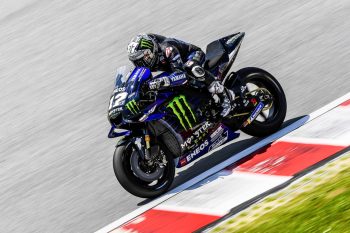 The Monster Energy Yamaha MotoGP rider topped the timesheets on day two before settling into P5 on Friday, where he completed 79 laps and finalised the direction of his testing program.

“The test was really good,” said Vinales. “I actually missed one time attack in the morning which I planned to make in the afternoon, but finally it was so hot that the tyre was sliding a lot, so I couldn‘t improve my lap time from the morning. Anyway, I‘m happy because on the race simulation I felt really good. I was really tired, but I felt good on the bike.

“Day by day the bike was working pretty similar, as in the last test. You always get positives and negatives testing new items. Now we have to come to a conclusion to see if we should bring the new fairing to Qatar.

“I also made some laps behind our rivals, so I could compare how our bike is working, and it‘s not bad. There are just some small details left and that‘s the most important. Last year they were some steps ahead, and now we are closer.”

The MotoGP World Championship contingent will now head to Losail International Circuit in Qatar on 23 February for the final pre-season test.