Victory the target for improving Rins in 2019 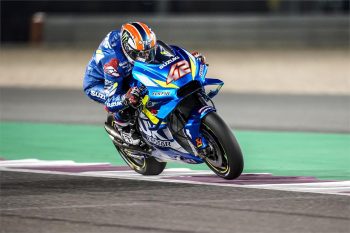 Team Suzuki Ecstar’s Alex Rins has set the target of earning his maiden victory in the premier class this season as the 2019 MotoGP World Championship kicks off this weekend.

The Spanish ace ended last season strongly, recording five podiums, including a pair runner-ups in the final two rounds of the championship.

With an improved campaign behind him, and a very positive experience in testing, Rins is hoping to build and go one better in the new season.

“Arriving for the Qatar GP is always very emotional because we can finally get into ‘race mode’ and blow away the winter cobwebs,” Rins explained. “The winter tests were positive, we found good improvements on the GSX-RR and I really enjoyed riding, but the race is something different and I definitely miss the adrenaline of nights out on the start grid.

“I’m very happy about how the bike has improved, the Suzuki engineers and technicians did a great job over the winter and I found positive feelings. Of course we still need to refine some things, and we still have some margins for development, in MotoGP the racing and development side is a never-ending challenge and we will work hard in all the sessions during every race weekend.

“Last year we ended the season in good shape, with many podiums, and the feeling that we can really go for the big prize! This is the objective that we’ve set for this season, to further improve our competitiveness and consistently put ourselves around the top of the sheets, trying to get one – or more – victories.”

Losail International Circuit in Qatar will play host to this weekend’s opening round of the MotoGP World Championship.