Dovizioso ‘back into good shape’ at Misano test 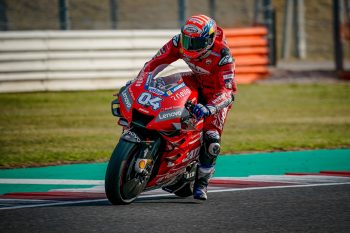 Andrea Dovizioso says he was ‘back into good shape’ at Misano’s MotoGP test last week, just days after being transported to hospital following a heavy first turn crash with Fabio Quartararo (Petronas SRT Yamaha) at the British grand prix.

The Ducati Team rider used the two-day test in Italy to ease his way back onto the bike, completing 37 laps on day one before putting in a strong 81 laps on Friday.

Despite not utilising the extra-soft rear tyre, the Italian ace set the 17th fastest time as he gained valuable data for the Misano grand prix in two weeks’ time.

“Luckily I managed to do a day and a half of testing, and physically I’m okay,” Dovizioso explained. “In the last few days we did a good job at home – I was able to get back into good shape and here I managed to lap on track, even though I still feel a bit knocked about.

“It was very important to test here, because we found a track that was quite different to last year, with not so much grip and because there were also all the other riders. We were able to do a lot of interesting tests in view of the race, both with the material available and with the set-up.

“I’m not entirely satisfied with our speed but it was important to get out on track in this test; we did it so now we’ll prepare well to get ready during the race weekend.”

Misano’s 13th round of the 2019 MotoGP World Championship is scheduled for 15 September.