Adam 'Krusty' Fergusson talks AMCN AUStest 2009, giving an insight into his battle with Gobert and his thoughts on a racing comeback. Well it makes me wonder what is happening in the world sometimes.

It has been a while since my last blog as I have been pretty busy with work, but I am sure the creator of this site will probably tell you that it was because he was faster than me on a 600 at Australian Motorcycle News’ AUStest sportsbike shootout recently.

Let’s just say that it was the first time he has ever beaten me on anything (and good on him) as Alex has improved his riding quite a bit in the last twelve months.

The funny thing is that Alex only has a couple of claims to fame. One is that he beat me in the 2002 AMA supersport championship… even though I only completed one race, and he did the whole season. The other is that he totalled my factory CBR600 at the first round of the World Supersport Championship in Valencia, Spain, in 2001 – when I was out with a pre-season injury.

AUStest was a blast and it’s a fantastic opportunity to be a part of a great event where I get to flog the best sportsbikes on the planet in a closed environment with the track to ourselves.

As you guys have now seen, everybody loved the CBR1000 yet again, but I was very impressed with the Ducati 1198S. I have not really been a fan of the Ducati in the past, but this bike blew me away. It is so good that if you have the cash to get one then get it!

Last year’s AUStest was a lot of fun too as there is a lot more than just riding the bikes, there is always a lot of rivalry in the paddock too. 2007 saw myself and the late Judd Greedy swapping a lot of verbal warfare between each other (much to the amusement of everyone present). But it was always in good nature, as Judd was a very close friend of mine and I will miss him forever.

So the question for this year was who would be the target of my abuse this year? I had a number of possible targets in MotoOnline.com.au editor Alex Gobert; AMCN editor Matt Shields; or even former 500cc World Championship runner-up Daryl Beattie.

The targets are endless, but in the end I decided to target Alex. Why you may ask? I really don’t know, but it sounded like fun as he was bragging last year that he would smash me on a 600 this test. And the bastard did exactly that. Not happy at all.
I will have to say that there is nothing like eating some humble pie to gain some motivation to get out and start training again. I have only been on a bike about four times in the last twelve months, but if you think I am going to sit by and let Alex duff me up again, never. Not going to happen again.

I truly enjoy doing things like AUStest, and I am thankful that my services are still required to help the public understand how good the current day sportsbikes really are.

So before I move onto the next topic… Alex, not going to happen again! But I still flogged you on the 1000s.

I have had a lot of people ask me when I am getting back into racing again, but I really have no desire to put myself in that position again. What people need to understand is that to run at the front in a national championship requires you to have the motive to put your body on the line in every corner of every lap.

I honestly cannot do that anymore, but do not get me wrong, I love racing just as much as I ever have – I just cannot stand to spend any more time in the hurt locker.

You must be prepared to crash all of the time, and as you get older like I am (I am only 34) you tend to view things a little differently. I will always cherish the moments I have had over the years, but I really do not want top subject myself to that kind of lifestyle anymore.

Anyways, I have some things to say about the racing going on around the world, but I will save them for another rant.

Ride smart and be safe,
Krusty 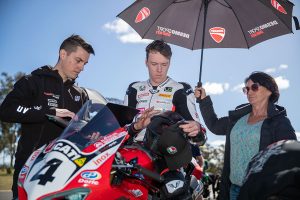