CycleOnline.com.au catches up on the latest in the world of MotoGP and Superbike in our latest Insider. 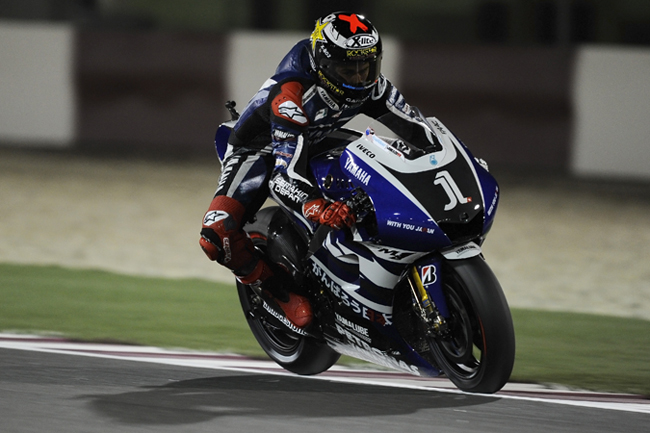 World champion Jorge Lorenzo was on the gas at the Qatar season opener despite struggling for top end, and he'll contend for the victory at Jerez.

MotoGP
We’ve had plenty of coverage on last weekend’s opening round of MotoGP so check the Breaking News section for that, but I just thought I’d quickly add my thoughts on who was impressive and who wasn’t.

Firstly, without saying, Casey Stoner was unbelievable all weekend for Repsol Honda. He was quick, confident, and ultimately proved too good when it counted in the final stages of the race.

I know Dani Pedrosa had a few arm problems at the end that hampered him, but he was also very impressive in challenging stoner all through the weekend – even if he was pushed to the limit.

Speaking of the limit, Yamaha’s Jorge Lorenzo was sensational to watch and demonstrated the type of form that made him world champion in 2010. The Yamaha isn’t exactly fast, but it handles good and I think he can battle the Hondas for the W at Jerez.

What about Valentino Rossi in his Ducati debut? Looking back now, I’d have to say it was about what I expected. He certainly didn’t challenge for the win, but he would have enjoyed the battle with Ben Spies on his ‘old bike’. Seventh was okay to start with and he was just four seconds slower than his race-winning time from 2010.

The positive thing is that Ducati has a clear direction forward right now, and for those who watched RPM on ONE HD last night, you would have noticed the confidence that Jeremy Burgess had when speaking of the development to come on the Desmosedici.

Suzuki was the failure of the weekend as the unfortunate injury of Alvaro Bautista ruled them out altogether. This is the risk you take as a one rider team, but it was silly considering John Hopkins was on hand at Qatar just days before the race started (he was at the test).

Queenslander Ant West was in line to ride the Suzuki in a last minute draft, but his MZ Racing team couldn’t reach an agreement with team boss Paul Denning and the rest was history. That’s a shame too, because Westy’s really struggling on his current ride.

On a positive note though, they’re expecting a much better all-new chassis for the Moto2 MZ in time for Jerez!

The show will go on in a couple of weeks at Jerez in Spain, and I for one can’t wait as a lot of good stories are still to come out of the season ahead in my eyes.

World Superbike
It seems like an eternity since World Superbike was at Phillip Island even though it was less than a month ago, and already the series is headed for round two at Donington Park this weekend.

The good news for Aussies is that Chris Vermeulen is planning on a comeback for Kawasaki after skipping Phillip Island, so hopefully he hasn’t lost too much of his form after such a long break.

Troy Corser will be looking to show up British teammate Leon Haslam on soil in the battle of the BMWs, but I have a feeling that’s going to be a hard task for this particular round since Leon’s no doubt completed loads of laps around Donington.

Mark Aitchison will be the final Aussie contender on the Superbike grid in his second ride for Pedercini Kawasaki, so hopefully the team has made some developments to its privateer ZX-10R ahead of round two.

In Supersport we’ll have Broc Parkes looking to capitalise on his early season form for Kawasaki, and Mitch Pirotta has been in Europe for a few weeks now and is set for his international debut at Kuja Racing Honda.

The Superstock 1000 FIM Cup doesn’t start this weekend so we won’t yet see Atho’s teammate Bryan Staring in action just yet, although he tested the Superstock bike for Pedercini last week and was said to be on the pace immediately at Misano.

Staring will actually race the Italian domestic series as well this year, the first round of that taking place a week before next month’s FIM opener at Assen in the Netherlands.

Australian Superbike
Phillip Island’s season opener was broadcast on SPEED last Sunday at 5:30pm, the perfect time for me to switch over and watch it directly following the Clipsal 500 V8 Supercars round on Seven.

The mammoth two-hour show was well done and great for the sport, giving the event time to breath and display what we all already know – Australian Superbike racing is some of the best you’ll see anywhere!

Already the guys at IEG have admitted there are things that can be improved upon, but I think that it was a polished product that shed good light on what was a positive start to the season.

I think the biggest thing that was overlooked in IEG’s recent television announcement was the fact that for all the regular rounds there will be an hour-long show featuring the support classes, which is a huge positive for them.

Last weekend on Saturday Wayne Maxwell headed out to Winton for some testing aboard his Team Honda Racing CBR1000RR, said to be working on development of the team’s high-tech Motec system among other things.

Also on hand at Winton were GAS Honda Racing teammates Craig Coxhell and Cole Odendaal were also on hand, working on improving their packages ahead of Darwin’s second round to be staged in a few weeks time.

From what we know there won’t be any testing from the top teams going on in the Northern Territory this year, which can only be a good thing since the expense is so high to do so.

We’ve documented the fact that Brodie Waters will be armed with the recently released 2011 model GSX-R600 at Hidden Valley, but we can also confirm that title leader Christan Casella will have Triumph’s all-new Daytona 675R at his disposal.

What are the advantages of the R you may ask? Well, a quick shifter, Ohlins front-end and Brembo Monobloc front brakes (like what you see on Ducatis) are the main advantages. The engine specification remains the same as the standard model. The word is the team will test at Winton next week sometime ahead of Darwin.

That’s all for this week, thanks for taking the time to stop by and remember to spread the word about our road content now featuring on CycleOnline.com.au!