Stoner content with sixth as Lorenzo leads early in Spain 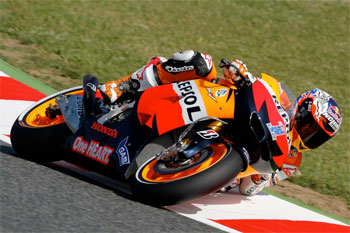 World champion Casey Stoner was sixth fastest during Friday’s proceedings at Catalunya in Spain, the fifth round of the MotoGP World Championship.

Stoner was fastest in the morning and ended up sixth overall with that time following practice two, opting to stick with harder compound tyres during session two.

“It’s been nice to have some good weather and consistent conditions,” Stoner said. “It’s very hot on track and I think everyone is struggling a little on the soft compound tyre. This afternoon we used the harder tyre and they seemed to be a little more consistent.

“We’re still not very happy with how the bike is feeling and we can certainly improve on that but we’re fairly happy as far as pace is concerned. Everyone seemed to treat this afternoon’s session like it was qualifying, using the softer tyre but in the end this is their choice!

“There are lots of things to try before qualifying tomorrow, we need to continue working on reducing the chatter and a few other things, but in general we’re pretty happy.”

Anthony West was 28th quickest in the Moto2 sessions, while Jack Miller put forward a solid performance with 13th in Moto3. Compatriot and fellow rookie Arthur Sissis was 29th fastest.