Breakthrough win for Stauffer sets up battle of the Hondas 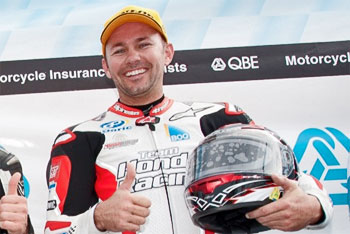 Team Honda Racing’s Jamie Stauffer has revealed that his breakthrough victory at Queensland Raceway’s fifth round of the QBE Australian Superbike Championship is exactly the boost he needed as season 2012 enters its final stages.

The 2006 and 2007 ASBK champion has suffered a frustrating season to date this year, largely upstaged by teammate Wayne Maxwell in the race of the factory Fireblades.

Stauffer’s race two and overall win at the ‘Paperclip’ has fired a shot back at Maxwell however, setting up an intriguing battle to be top Honda in the final two rounds.

“It’s really good [to win] because we have been struggling all year and that’s no secret,” Stauffer told CycleOnline. “It was good to get out there and get a race win.

“We made a big improvement with the rear suspension last night, but we do still have work to do – it’s a step in the right direction anyway.

“Hopefully we can keep making progress that we made this weekend and it will be a good, strong end to the year.”

Paul Free’s Honda outfit has been developing an all-new DVS rear suspension system in 2012 after using Showa last year, and Stauffer admits that it’s been a trying first half of the season.

“We’re using different suspension this year compared to last and it’s taken longer than I would have liked to sort out,” Stauffer continued. “Sometimes you hit the ground running and other times you don’t but we have made a step in the right direction.”

Stauffer hopes that this turnaround with two rounds remaining will transfer into the season’s final stages, finally finding answers that he’s been searching for throughout the first four rounds.

Stauffer was third in the opening race, held in drying conditions, before he dominated the second 17-lapper with a 4.833-second buffer.

“Even after qualifying yesterday I was a bit down, so I just said to the boys make a big change and it paid off,” Stauffer continued. “It was better in the wet and better in the dry as well. Hopefully we can continue this form at Phillip Island.”

Maxwell’s weekend was affected in race two when he was forced to pit with brake problems during race two, recording seventh overall for the round.

The Honda pairing is also expected to form a partnership in next month’s Suzuka 8 Hours round of the World Endurance Championship in Japan.